So, Did They Get These From American Gun Shows?

"Several of the grenades used in the three recent attacks failed to go off because of a fault in the device or incorrect arming." -- The Bandidos forgot to read the directions.

Courtesy of Statfor we have this.

Mexico, U.S.: A New Weapon in the Cartel Arsenal

Grenades used in three recent attacks in Monterrey, Mexico, and Pharr, Texas, all originated from the same lot delivered from South Korea, a Stratfor source has indicated.

The first of the three attacks targeted the U.S. Consulate in Monterrey, Mexico. Gunmen rammed their car into the consulate’s front gates at night in October 2008, firing automatic rifles and tossing a grenade that failed to detonate. In the second incident, again in Monterrey, gunmen attacked a local TV station on Jan. 12 in an attempt to intimidate the news agency into cutting back reporting on cartel activities. The feared group Los Zetas, one of Mexico’s deadliest and most professional drug-trafficking organizations which originally came from the ranks of Mexico’s special forces reportedly was behind both attacks.

In the third attack, three Hispanic men on Jan. 31 tossed a grenade into a night club near Pharr, Texas, a border town about 140 miles from Monterrey but the grenade did not explode. The attackers might have been targeting three off-duty police officers who were in the club at the time. Police are still searching for the culprits, whom a Stratfor source has indicated might have belonged to the Bandidos motorcycle gang. The Bandidos have ties to Mexican cartels, as well as a reputation for violence.

The Bandidos gang and groups like it are known to have used improvised explosive devices like pipe bombs. These are less reliable and less effective than military-grade grenades even though several of the grenades used in the three recent attacks failed to go off because of a fault in the device or incorrect arming.

Mexico’s military is known to use South Korean grenades. High levels of corruption in Mexico make it very likely that members of the Mexican military sold the grenades to Los Zetas. While internal investigations might be able to plug some of the leaks that permitted this transaction, cartels’ willingness to pay top dollar for such weapons translates into a huge temptation for poorly paid military personnel. The illegal sale of grenades and other weapons and ordnance, like armor-piercing rounds, to the cartels can therefore be expected to continue.

U.S. officials already have expressed concerns of being out-gunned by well-armed Mexican killing squads that use high-powered, automatic weapons. The addition of grenades to the arsenals of gangs north of the border represents even more of a threat to U.S. law enforcement.

In 1998, the Federation of American scientists reported in a paper entitled "Small Arms Trade" that:

Theft or capture of state security forces’ arms is a major source of black-market supply around the world. The U.S. government rarely conducts end-use checks on weapons it has exported, greatly facilitating the diversion of weapons. Between 1989 and 1993 the State Department approved 108 licenses for the export of over $34 million of small arms to Mexico, but it performed only three follow-up inspections to ensure that the weapons were in the intended hands.

Well, duh. Maybe the Bandidos got their hand grenades from the same place these mokes got their Barrett M82s: 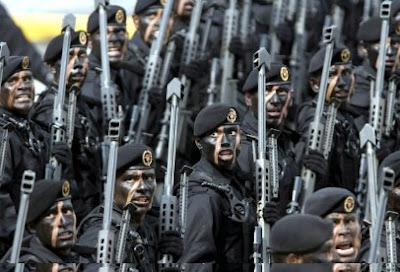 One thing for sure -- it wasn't off the table at an American gun show.
Posted by Dutchman6 at 9:29 AM

Of course it didn't come from any American gun show. However, the anti freedom fascists would say anything to make people buy their agenda. And what is sad is that many ignorant people actually believe this shit.

It wouldn't be long before the drug cartels will start using tanks and APCS in their attacks. Drug cartels in Cambodia and SE Asia started off using auto-fire goodies, then they started using tanks too. That was back in the 1980s. That is another rule of life: wherever there is strife and struggle, there will be plenty of flotsam and jetsam to pick up off the ground. Lets see how the fascist media report, when the cartels start using really heavy weapons.

How hard is it to use a frackin grenade? Pull pin and throw!