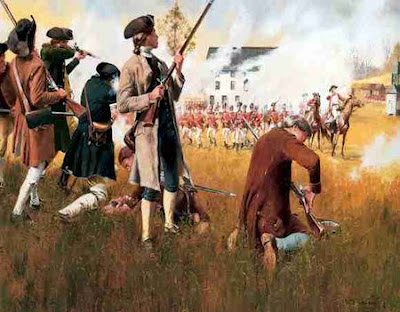 I wrote this back in 1994 for Bill Clinton. It still fits and bears repeating.

I didn't want to start a war,
It was not my intention.
They were subjects of the King, you see,
And so were under my direction.

There was riot and tumult 'round about,
The King's name was disrespected.
The sight of Regulars, by gad,
Would soon put things corrected.

Was all those guns 'round about,
Held by enemies of the Crown.
T'would not be peace upon our terms
'Til they were gathered into Town.

So we quickly slipped out of Boston
Undetected, we thought, at night.
And when we got to Lexington,
The Rebels were put to flight.

My men went on to Concord,
'Twas most efficiently done.
But after the fight at Concord Bridge
'Twas our turn now to run.

It started out quite disciplined,
As Regulars we'd never lost --
But after about a mile or so,
We began to count the cost.

The path from Concord back to town
Was a toll road bought with blood.
What was a march became a rout
And the butcher's bill, a flood.

Cowardly little farmers,
They'd hardly ever stand.
Yet no sooner would we shoo them off
Here would come another band.

They didn't like our bayonets.
They were very fleet of foot.
But give 'em a tree to hide behind,
By gad, those farmers could shoot!

I waited back in Boston town,
For news of our victory.
We'd have the guns and powder and shot
And their assault artillery.

But then came the despatches,
And the melancholy reports.
We'd got their guns and powder and shot
But we'd got them in the shorts!

The Siege of Boston then began,
And at Breed's Hill made plain
That militia who knew how to shoot
Can limit a King's domain.

But I didn't want to start a war.
It was not my desire.
It was a "reasonable regulation."
I never thought they'd fire.

The yokels ended my career,
In time they whipped us fair.
And let that be a warning
To any well-intentioned heir.

For one thing you should never do,
Either seriously or in fun,
Is try to part a free American
From his liberty and his gun.

For you will find to your chagrin,
Though you may not intend it,
To march from Boston is easily done,
But you may not get back in it.
Posted by Dutchman6 at 5:05 PM

Enjoyed very much Mike.
Thanks

I also enjoyed it, and I dearly hope that lots of people in the administration read and understand it (like everyone understands the sound of a pissed off rattlesnake giving one last warning that it wants to be left alone).

Regarding that picture - I remember seeing it somewhat differently, with the militiamen wielding AR15s or M16s. Does anyone have a link to that picture?

Here's an interesting article on the battles of Lexington and Concord...leading into a plea to join Appleseed. Pics are gone, by the way.

WOW MIKE!! That is one hell of a poem. You should have that on the preface page of Absolved, man. That is some writing skills right there that will make Thoreau and Clemens envious.

If that poem wasn't specified as written by you, I would immediately thought that it was written by a fierce and proud militiaman right after Concord fight.