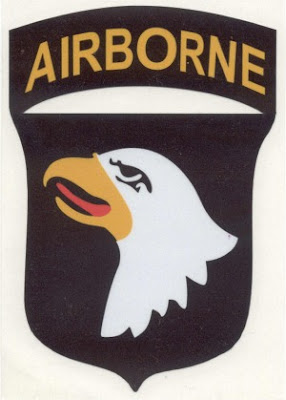 Though my son Matt has transferred out of the One-Oh-One and is now with the 1st Armored Division in Iraq on his third tour of that country (the first two were with the 101st), I know his thoughts and prayers are with the Screaming Eagles as the entire division heads to Afghanistan. So are mine.

FORT CAMPBELL, Ky. (AP) -- The U.S. Army's 101st Airborne Division is heading to Afghanistan this summer. It is the division's fourth deployment since the wars in Afghanistan and Iraq began.

The division wrapped up its flag in a case during a ceremony Wednesday at its Fort Campbell post on the Tennessee-Kentucky state line.

That is the final step before taking over NATO operations in the eastern region of the country.

The entire division of 20,000 soldiers will be in Afghanistan this year and most will be stationed in areas in the eastern region near the Pakistan border.

Maj. Gen. John F. Campbell said the 101st units will focus on transferring responsibility for security to the Afghan government.

We travel about fifty miles from near Kentucky Lake down to Oak Grove (north of the state line from Clarksville, TN) to attend a traditional Latin Mass. Several young men from Ft. Campbell and their families are regulars. Most are getting ready to deploy or have just left.

We just stood as godparents for one young couple who just baptized their child. The husband, some sort of maintenance MOS, just left for some predeployment training.

God bless them all.

I don't know what it is about the 101st. It just seems like family.

One of my oldest childhood friends is the PAO for the 101st. If all the other officers they have are half as good as him they'll be in good hands.

First Strike! 1stBN 502d INF.
My unit during the First Gulf War.
A damn good unit, doing damn good work.
May their safety only be exceeded by their success!

I have the utmost respect for these soldiers. I only hope that someone,somewhere, in our bloated bureaucracy has an exit strategy for this Afghanistan nightmare. Militarily we can defeat anyone,it is that nation building part that seems to bog us down and use our fine young men and women as cannon fodder in a never-ending story.

Amen to that Knuck, NO More Nation Building.