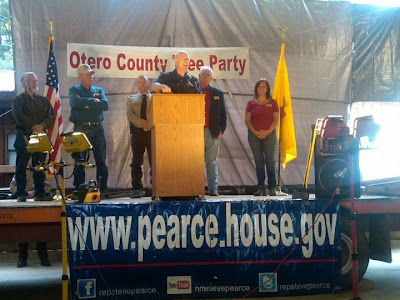 Just heard by phone from Bob Wright on the Otero County Chainsaw Rebellion today. About 300 folks showed up to defy the Feds and the Feds blinked. Congressman Pearce cut down the first tree and then it was cut into 2" slabs and handed out to members of the crowd as souvenirs by the Otero County Sheriff Benny House. 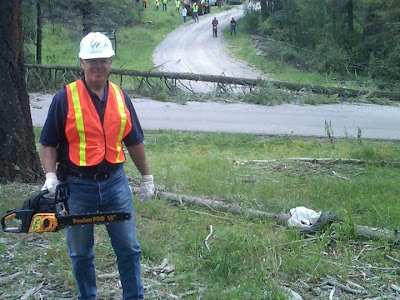 Steve Pearce with implement of federal defiance in hand, just after cutting down the first tree.

The Feds came into town a couple days ago and threatened to arrest anybody who tried to cut down a tree. The Sheriff is reported to have said, "You do that and I'LL arrest YOU for kidnapping." The Feds made themselves scarce today, Bob reports. 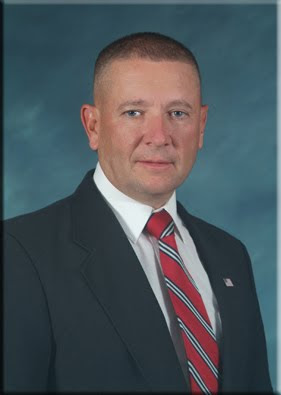 Otero County NM Sheriff Benny House. He told the Feds he'd arrest them if they interfered with the Chainsaw Rebellion.

I expect a more complete report later today and will post it when I get it. 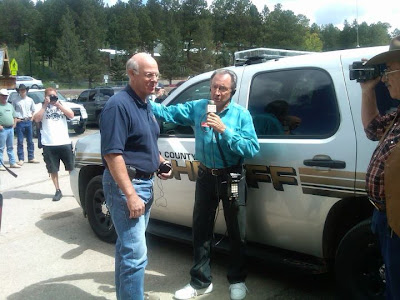 Congressman Pearce interviewed after defying the Feds at the Otero County Tree Party.
Posted by Dutchman6 at 4:21 PM

Bout time someone stood up to them.

Is this the same operation?

This story made my day!

Outstanding. MORE of this is badly needed nationwide if we are to survive as a country.

Bwahaha - took me a while to track it down but the supposed 'takeover rally' on Wall Street - ya know the one to force old barry to do something about the evil big bankers - only drew about 1,000, just a wee bit short of the 20,000 the 'organizers' expected.......
Meanwhile, out in the New Mexico wilderness, 300 (minimum) showed up to protest and take direct action against overt federal usurpation of state and local affairs.
Hey CONgress - can you hear US now?

I LOVE.the sound of FREE MEN claiming their Liberty!

G-D do I EVER WISH I COULD HAVE BEEN THERE!

I say Up Their Arses!

God Bless you Benny House. Many forget that Federal Officials travel these united States at the pleasure of the States. At last, a Sheriff fullfilling his duties! And a state, and local commissioners putting their collective feet down and just doing something positive and productive.

The Forest Circus is one of the single worst managers of forest property. Constant squabbling and fighting with other fed entities and local entities over who actually has the authority to fight a fire while fires are burning our resources, homes and killing livestock and wildlife. Ijits.

Yes, as this case illustrates, voting does matter. Placing an at least marginally-competent and marginally-honest sheriff in office along with a voting majority of actual Americans can mitigate the abuse from federal agents.

Citizen of a Differ'nt State said...

As an absentee landlord, the Feds have left the maintenance and upkeep up to the Local Citizenry. The Locals are in a better position to say what is the best way to maintain the Nation’s interest in this little bit of tinder,the Federal Land and the infrastructure it sits on. And they will do it more cost effectively and with keen eye for safety and sustainability. As a Citizen of a Differ’nt State, I approve.

This has to start happening all over this country! Screw the so-called "defiance" of the Day of Rage fiasco (nobody cared, and the stockbrokers drank champagne while smiling down on the protesters) - THIS is the civil disobedience we need to throw at the government at every chance. Nice to see the local law enforcement backing the locals instead of jumping through hoops for the feds.

I went with several of my friends from the Otero County Tea Party Patriots. It went pretty much as stated.
Wish that more than one anti had shown or even a fed or two just to see what might happen but it wasn't to be.
All of you people need to get together, get your elected officials in line, support them and take back your county and our country. It can't happen if you are watching the one eyed mind sucker all weekend so get up and get to it. It does and will work.

i am SO PROUD of the sheriff and people who stood up to the jackbooted thugs that have taken over our country--i used to live in Alamogordo and taught at NMSU--always a hearty KMA bunch i rugged indivualists. How about coming to Harris county here in Houston and talk some sense into our criminal sheriff's department--here they ARE the jack booted self serving thugs just like the FEDS--of whom most are FED UP.

Let the County Sheriff, America's Last Hope be our guide to the Declaration and US Constitution.