Shameful indeed. Gun show promoter lies about the law and does Charlie Schumer's work for him with a smile. 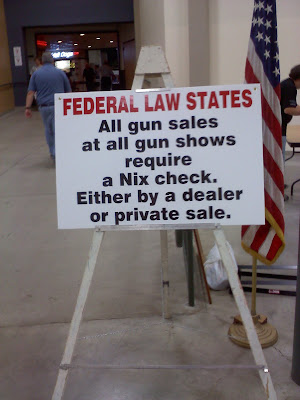 Received the photo above along with this explanation from Irregular Mark from New York.

This picture was taken at the main entrance to the Rochester, NY Gun Show, put on by the “Empire State Arms Collector’s Association” (esaca). I mentioned that there was no such federal law and had some of the dealers there argue with me about it. They not only claimed there was such a requirement, but were supportive of it and claimed I’d be in “big trouble” if I made a private sale without a background check. I suspect they just wanted folks making a private transaction to come over and pay them an FFL fee for the privilege of selling their private property to another private citizen. Shameful.

Liar, Liar, Pants on fire! Lying Bastards will do anything to intimidate the Citizens of this Great Nation.

To be very honest I'm surprised that NY city residents can even attend gun shows.

Thank you for showing them the truth.

But Phelps, the intent IS to Nix your purchase. So he DID spell it correctly.

Go ahead New Yorkers, love your chains. Warm and fuzzy aren't they?

Not claiming it is, because I have no way of truly knowing, but that looks like a photoshop to my untrained eye on this here puter screen.

Now, on the other side of things, I can see how someting like could be very real. Illinoisans have long been told it was the law that we must have a FOID card (Ownership permission slip) in our possession to pick up and hold, to even touch a firearm, or ammunition, in a retail store or gun show. This while there is no such code to that affect whatsoever.

Hmmmm, didn't anyone ask them to "show us the law"?..like people have been asking the IRS for decades.

Surprised that no one used a large bold marker to write "LIAR" across the sign.

This is in Rochester, not NYC, and I was going to hit the show this weekend. I think I'll give it a miss now.

Most of New York State is hard-core conservative. As New York City goes, so goes the rest of the state. Don't mistake New Yorkers in general with the idiots of NYC.

The real shame, though, lies with the screwtard dealers who supported this. They are killing themselves either out of ignorance or a desire to make a buck acting as an FFL. My curse to them: May they get everything they ask for.

Recommend starting a petition for a Special Prosecutor here: https://wwws.whitehouse.gov/petitions#!/petition/create

and then publishing/pushing it on sipsey.

Here's an example of a petition in progress: https://wwws.whitehouse.gov/petitions/!/petition/abolish-tsa-and-use-its-monstrous-budget-fund-more-sophisticated-less-intrusive-counter-terrorism/c7L94bFB

It might be a state requirement, since it's in New York. I know that the Volksrepublik of Kollyvornia requires all private sales to be run through NICS, as well as their own bunch of hoops. Either way, it's as useless and wrong at the state level as at the Federal level.

And yeah, the Nix spelling might be wrong, but it sure is more appropriate.

It never fails. The folks who should know what the law says don't, or attempt to make it up as they go.

After all, the only thing the rubes know about the law is what we tell 'em.

Its a NY state law - not federal. Enforcement? I dont know.

Ashrak,
I took that picture with my cell phone Friday evening. I can assure you it is NOT a photoshop. (members can enter the show Friday evening during setup. I will not be renewing). Also, this is upstate NY, not NYC. We like our guns just fine and our government not at all up here.

I'm pretty sure private transfers are banned in the state of New York, so while the wording on that sign is wrong, it is technically correct.

NY State law requires private transfers AT A GUN SHOW to have NICS check prior to transferring the weapon. This is a requirement only AT NY gun shows, by extension if you agree to sell a firearm AT A SHOW and conduct the transfer elsewhere it is a class A misdemeanor.
This has been a law since 2000, thanks to our REPUBLICAN Governor George Pataki. The same REPUBLICAN governor that, by executive order, made the 1994 Assault Weapons ban permanent in NYS.