Another country heard from . . . a year and a half later. Must have strayed over from a Media Matters link. 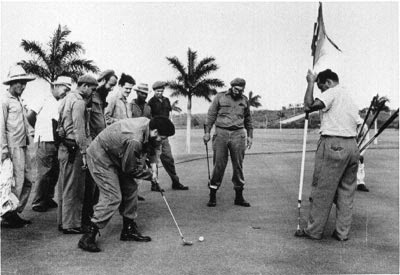 Responding to this post, we have today -- a year and a half late -- received a message from that other country and its alternate universe.

Another candid shot of a corporate right-wing nazi plotting to exploit the workers.

WHAT YOU FAIL TO UNDERSTAND IS THAT THERE ARE AS MANY LEFTY MOTHER FUCKERS FULLY ARMED WHO HATE THE BLOODSUCKING CORPORATIONS AND ALL THEIR LACKEYS LIKE YOU....THE IDEA OF A COUNTRY CLUB,WHERE YOU IDIOTS HANG OUT, EXPLODING IN A BURST OF FLAMES JUST GETS ME HARD. I HATE CORPORATE RIGHT WING NAZIS WITH ALL MY HEART.
September 30, 2011 6:57 PM

You know, I don't know about y'all, but I don't hang out at the country club. Just one of those places that I find inherently uninteresting.
Posted by Dutchman6 at 10:23 PM

I seriously doubt this, but we shall see, shan't we?

Mickey, Mickey..
nuthin wrong with a round now and then with my gun club board members.
We make deals, talk tactics/coms, try to help each other succeed.
We are geezers and suck at golf but I don't think sugar can hear us, maybe.

I actually know a couple of dipshits like this. If they have arms at all, they're not anywhere near militia quality, have absolutely zero training whatsoever (seriously, could not hit the broadside of a barn at fighting distances), and they also reside in tiny, gun-hating northeastern states where the government knows exactly what you have, requires a license for you to buy the weapon and ammo, and knows where you keep it. Oh, and very few gun stores, isolated areas for caches, ranges, and so on and so forth. You get the idea. They all think they're some badass resistance gang from an action movie though. Pathetic.

I've never seen a lefty who knows squat about guns, marksmenship or the discipline to learn how to use a rifle.

Must be the Missouri roots in me; I'll believe it when I see it.

Personally, I love country clubs because it's a place where you can unwind and do pretty much as you wish, creating a tiny slice of freedom for yourself, in an otherwise freedom and liberty crushing society. They also have great food!

What the Marxists don't like is the fact that you have to pay for that freedom and those benefits, making them private and personal benefits. In other words, they can't control it and therefore be in charge of it, enjoying the benefits and then charging the bills to someone else.

They don't favor country clubs unless they are for party members and just like everything else, they will create "special country clubs" for "elite" members. On the flip side, you can bet their club sandwich will be killer, if they let you in.

Hmmm, never spent much time in country clubs, too busy either serving the country or working for a living. Is this moron really serious? Is he really THAT stupid? These leftist loons use that sort of rhetoric all the time, they yearn for the day the "glorious revolution" comes to pass. If the lid ever comes off, and there is no one to referee the whole thing, no one to call "time out", no one to cry "foul", these idiots will die in huge numbers. Do they REALLY want this to go to guns? Morons.

I can't help but find this humorous. But, I must admit that I know a few vets who are of that persuasion. Mind you, very few.

A friend that has passed used to say he loves golf courses they are a good place to bury stuff.
But every golf club I have been to you could find more Libs or Lib friendlies than any other group. So this twit aims to practice fratricide!
Something we should encourage!

My father received membership in the Cape Fear Country Club, in Wilmington, NC, where I first picked up a golf club on a course. The membership was free as a part of his employment in a local business as manager of it.

We were also members of a small county "country club" when we lived in rural Montgomery county, NC (pop. 19,900 in 1960) as did anyone with an interest in either golf or the sole swimming pool within 10 miles. I think this cost my father some three or four hundred dollars a year, cheap for a family of six.

However, the last time I was on a golf course was at the Black Horse course on the former Fort Ord, California while attending the Concorso Italia with my '72 BMW 3.0 CSi, it's Italian designed body work got me in with the Ferraris and Maseratis for two days.

This young vet/lackey welcomes your attack.

Golf is a challenging game of distances and obscure targets with varying lies to shoot-from, it's a lot like shooting steel at unknown ranges - my AR can fit in the bag with my clubs too.
You can smoke cigars out there without the nasty face of social disapproval, and usually the restaurants are pretty good as well. Better than Lefty swill anyhow.