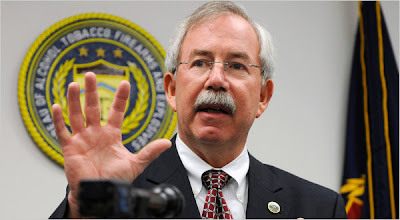 A just-uncovered January 5, 2011 email to former Bureau of Alcohol, Tobacco, Firearms and Explosives Acting Director Kenneth Melson from Stephen R. Rubenstein, Chief Counsel, ATF, responded to a request by Melson for information regarding allegations on whistleblower website CleanUpATF that walked guns were linked to the murder of Border Patrol Agent Brian Terry, and indicated this was a violation of ATF Orders and Standards of Conduct.

Copies of the email and Melson’s reply are posted in David Codrea's Scribd account.

This is in response to your request regarding information posted on "Clean Up ATF." Specifically, on December 22, 2010, "1desrtrat" [screen name used by CUATF comment poster--DC] stated that "word is" that Phoenix FD ASAC George Gillet "[a]llegedly approved more than 500 AR-15 type rifles from Phoenix and Tucson cases to be 'walked' into Mexico." The post further states that "[o]ne of those rifles is rumored to have been linked to the recent killing of a Border Patrol Officer in Nogales, AZ."

That post can be read here, and was the basis for my initial December 28 report on the Gunwalker/Terry nexus.

“The disclosure of this information has a potential deleterious effect on ATF's undercover operations,” Rubenstien continued. “In that regard, suspects may alter their behavior if they know that law enforcement is allowing certain firearms to 'walk' into Mexico. In addition, public knowledge of this type of operation potentially places informants and undercover agents in jeopardy. Finally, public disclosure of such information could ATF's working relationship with Mexico.”

Examined objectively, Rubenstein admitted guns were purposely allowed to walk, that walking guns to a foreign country must be hidden from the public, and that if the Mexicans found out about it, cooperative law enforcement efforts would be jeopardized.

“If ‘1desertrat’ is an ATF employee,” Rubenstein advised, “then he/she is subject to our Orders and Standards of Conduct.”

Examined objectively, Rubenstein admitted "1desertrat's" allegations were true, otherwise, there could be no disclosure of official information, nor jeopardizing of operations, personnel or relationships.

Copied on the email to Melson, and apparently taking this assessment from his boss as marching orders, was ATF Associate Chief Counsel Barry S. Orlow. Per The Washington Times in a July report:

House Oversight and Government Reform Committee Chairman Darrell E. Issa, California Republican, said at least two scheduled witnesses expected to be asked about a controversial weapons investigation known as “Fast and Furious”received warning letters from the Bureau of Alcohol, Tobacco, Firearms and Explosives to limit their testimony…after receiving subpoenas, at least two of the agents got letters from ATF Associate Chief Counsel Barry S. Orlow warning them to keep certain areas off-limits, including those still under investigation. Neither of the targeted agents was identified.

Mr. Issa said at least one witness wanted to back out of testifying to his committee after receiving the letter, but the chairman declined that request. Instead he fired a letter back to William J. Hoover, deputy director of ATF, saying the “timing and content of this letter strongly suggest that ATF is obstructing and interfering with the congressional investigation.”

David Codrea's Gun Rights Examiner June 22 report on the Issa letter, including a copy of it, can be read here.

Thanks, Steve. I am going to forward this to A. Ken.

His self-interested cooperation with Congressional investigators notwithstanding, the former Acting Director’s cognizance and involvement warrant further examination of his role in covering up Gunwalker activities and retaliating against whistleblowers.

And who "A" is remains to be determined.

I will have more on the Chief Counsels Office and the cover-up later today. David's post is here.
Posted by Dutchman6 at 6:32 AM

Probably A. for A.G. Holder.

This email confirms all the allegations listed in "The Gunwalker Scandal Made Simple."

If you click on the copy of the email you can see that "A" is really IA (Internal Affairs). The I is there, although difficult to see.

A is for Axelrod.

GunWalker is why he went to go "spend more time with his family".

He knows he is going to go to jail so he had better enjoy his time with them now.

Rahm, your time is coming too, homeboy. You are in the batter's box right now.