When is an SKS not an SKS? When the FBI needs it to be an AK for the cover-up of a murder.

This is a picture of a standard AK47 with thirty round magazine.

One thing that every gunnie knows is that reporters, as a general rule, do not know shit from shinola when it comes to firearms. This being the case, they can be sold just about any bill of goods by hoplophobes or scheming "law enforcement" types with an agenda.

Thus it is with FOX's assigned DOJ flack, Mike Levine. Witness this statement in Levine's latest:

In those newly disclosed recordings, the ATF noted that “all [she] can go by is what” the FBI told her. Pelletier, now with Mintz Levin in Washington, said he believes he knows the origin of the three-gun “misperception.” He said the FBI originally identified one of the two guns recovered as an SKS, made in China.

Now, there are a whole lot of things wrong with this statement, not the least of which is the repeated reference elsewhere, including Levine's own network's stories, by sources to the "third gun" that was "disappeared."

But let's just look at the statement, which claims that someone falsely identified one of the two F&F Kalashnikovs as an SKS.

Okay, SKS vs AK. Could an FBI agent working the border (or, more likely, several experienced FBI agents at the Terry murder scene) make a mistake confusing the two? Only if they were all deaf, dumb and blind. For the uninitiated:

This is a picture of an AK without a magazine alongside an SKS with the standard non-detachable 10 round magazine.

Even the firearm ignorant can note the obvious differences. Pistol grip versus no pistol grip, length, integral bayonet versus no bayonet, etc.

Even an SKS with an aftermarket 30-round magazine, or an SKS-D with a standard AK magazine well, looks considerably different than the AK. 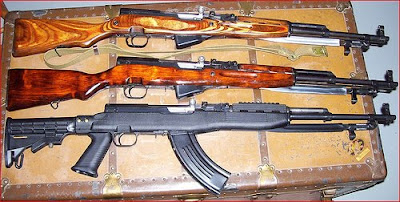 This is a picture of three SKS's, including a sporterized version with a 30-round "duckbill" civilian aftermarket magazine and a pistol-grip.

Now look again, oh ye uninitiated, at the Kalashnikov versus the sporterized Simonov. Is it all that hard for you to tell the difference? Up close the differences are even more striking -- gas system, front sight, bolt handle, safety. Any gunnie or experienced cop can tell at a glance the difference between the two types, even with a sporterized stock with pistol grip and a thirty round magazine.

So what Gunwalker Bill's DOJ approved lawyer is saying is than a bunch of experienced FBI invesigators with another AK to compare with at the scene, mistook the other AK for an SKS. And thus, of course, the "third gun" reported by several folks, including the ATF employee who ran the traces is just a "misperception."

This is a picture of FOX's DOJ correspondent/producer Mike Levine.

Levine is a guy so apparently firearms-illiterate that he let a DOJ-approved lawyer who represents another guy who is an obvious perjurer -- both of whom having a huge incentive to deceive or even lie -- to buffalo him on such an plain bit of firearm silliness, and to let it into his story unchallenged.

Mike,
Google an image under "reporter's guide to firearms"
Everything is either an AK or a Glock. fully automatic too.

Also of note, the recovered AK variants were Romanian manufacture, kind of hard to mistake for "made in China" type markings...

I have personally witnessed LE record an SKS as an AK-47 on a property sheet. Hanlon's razor was in full effect that day, and the officer was ignorant enough to identify a sporterized SKS with a 30 round detachable magazine as an AK-47.

I'm not saying that is what happened in the Gunwalker cover up, but it has happened at least once in my lifetime.

Are you surprised? Dude plucks his eyebrows.

On the other hand, a Miami Herald article once related a City of Miami cop telling the reporter that FMJ projectiles were "war heads".

At least in the later case, you would often be mistaken.