Something I didn't hit hard enough earlier: OIG's supposedly "independent" investigation of Gunwalker is just another part of the cover-up. 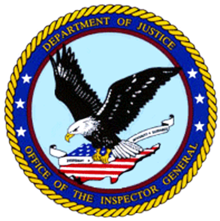 The OIG conducts independent investigations, audits, inspections, and special reviews of United States Department of Justice personnel and programs to detect and deter waste, fraud, abuse, and misconduct, and to promote integrity, economy, efficiency, and effectiveness in Department of Justice operations.

Specifically excluded from the authority of the OIG is jurisdiction related to the criminal or ethical conduct of DOJ employees who are attorneys. The Office of Professional Responsibility is responsible for oversight of attorneys employed by the DOJ. -- Wikipedia.

I was talking to a reporter last night, and we were puzzling out who released the Lone Wolf tapes and why. Strangely, it might even have been someone on the MINORITY side of Issa's committee, although the reasons are a little vague. As I said, it is a puzzle. (Katie Pavlich has some speculation here.)

Anyway, when I first posted the CBS story containing the paragraphs below here, I didn't hit hard enough on this point:

Law enforcement sources and others close to the Congressional investigation say the Justice Department's Inspector General obtained the audio tapes several months ago as part of its investigation into Fast and Furious.

A spokesman from the Office of the Inspector General today said, "The OIG officially provided the United States Attorney's Office with a copy of the recordings in question so that the USAO could consider them in connection with the government's disclosure obligations in the pending criminal prosecutions of the gun traffickers. Prior to receiving the tapes, the OIG made clear that we would have to provide a copy of the recordings to the United States Attorney's Office because they would need to review them to satisfy any legal disclosure obligations."

This is the supposedly "independent investigation" of the DOJ's Office of Inspector General. The whistleblower agents have long maintained -- even before Gunwalker -- that the OIG is just another part of the cover-up machine. I guess they were right.
Posted by Dutchman6 at 6:00 AM

Quote, "...in the pending criminal prosecutions of the gun traffickers."

You mean to tell me that DOJ personnel WILL BE prosecuted for gun trafficking?

I'll believe it when I see it!