Lee Herbert Hamilton (born April 20, 1931) is a former member of the United States House of Representatives and currently a member of the U.S. Homeland Security Advisory Council. A member of the Democratic Party, Hamilton represented the 9th congressional district of Indiana from 1965 to 1999. Following his departure from Congress he has served on a number of governmental advisory boards, most notably as the vice chairman of the 9/11 Commission. -- Wikipedia. 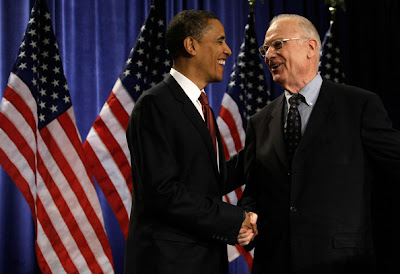 Former 9/11 Commission chair Lee Hamilton is endorsing Obama today. It's a big pickup for the candidate--not merely because Hamilton's longtime congressional seat is in Indiana, which votes May 6th--but one that should not surprise loyal TNR readers. Noam may have foreseen the announcement in his wonderful explainer on Obama's "people" from last month. Turns out many of them, including foreign policy guru Denis McDonough, speechwriter Ben Rhodes, Dan Shapiro and Dan Restrepo, who advise Obama on the Middle East and Latin America, respectively, are all "Hamiltonians" (some also by way of ardent supporter Tom Daschle). -- "Six Degrees Of Lee Hamilton" by Dayo Olopade, The New Republic, April 2, 2008

Dan Restrepo, fresh from the Class of '93 at the University of Virginia, snagged a job after graduation on the staff of then Congressman Lee Hamilton on the House Committee on International Relations. He worked there until 1996, when he did a very partisan bad thing.

Read the letter below (If you have trouble reading it in the format below, just click on the link): 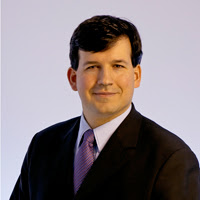 As the Hawaii Reporter noted almost ten years later at the time of a lesser GOP "memogate" scandal:

The public ostracizing of Miranda stands in stark contrast to a similar incident in which a Democratic staffer accessed memos from Republicans on the House Committee on International Relations.

In a letter obtained by Talon News and dated February 20, 1996, then-International Relations Committee Chairman Benjamin Gilman (R-NY) wrote to the committee's ranking member, then-Rep. Lee Hamilton (D-IN), regarding the faxing of documents to the Department of State which were "prepared solely" for Gilman's "personal use." The two committee documents were obtained by Hamilton staffer Dan Restrepo through an insecure computer backup system.

Gilman enumerated in detail how Democratic staffers including Restrepo could access personal files from the Republican majority. Gilman went on to say that he and Hamilton "managed to maintain a collegial relationship over the years, notwithstanding the political environment in which we work."

"The facts outlined [in this letter] are inconsistent with that collegial spirit," Gilman wrote in the letter to Hamilton.

It is there that the similarities end between the two memogate controversies. Gilman ended his letter to Hamilton by stating that steps would be taken "to modify the Committee computer system to prevent any future unauthorized 'perusal' of Committee documents."

"I would hope that ... you would take appropriate steps to ensure that there are no further leaks by your staff of sensitive Committee documents," Gilman wrote.

The scandal was addressed out of the public eye, and no staffer was publicly asked to resign or became the subject of an ethics investigation. In particular, the staffer in question, Dan Restrepo, went on to law school and now serves as chief lobbyist for Democrat John Podesta's Center for American Progress. Hamilton, who went on to serve as the vice chairman of the 9-11 Commission, and Gilman handled the incident in private.

Of course now Restrepo is on the National Security Council and the White House has been forced to admit that he was briefed on Fast & Furious by his deputy Kevin O'Reilly, a long-time friend of "Gunwalker Bill" Newell.

So, let's recap. Young Restrepo spied on both GOP and Democrat members of the committee for the Clinton State Department FOR MORE THAN A YEAR, got caught, skipped away without punishment and went to law school, where presumably he learned to be more careful about tipping his unscrupulous hand.

He has been described by sources who know him as "ruthless," "amoral," and a "f-cking political thug" who would "sell his mother or stab his father" if he thought he could thereby get ahead.

Just the kind of loyal political functionary to carry out a sensitive, secret operation like the Gunwalker Plot.

(LATER: Credit where credit is due. The Committee for Justice was the original source of the pdf of the Gilman letter.)

What a slimy turd!

I believe you've found The Man - now how can we convince him to sing?

I suppose waterboarding is right out, huh?

Yeah. A slimy turd who is owned by other slimy turds who are Marxists. Who knows, maybe he has his own hammer and sickle pin under his lapel. All the people around him do.

Some people start off good and when tempted become bad. Others just start off bad.