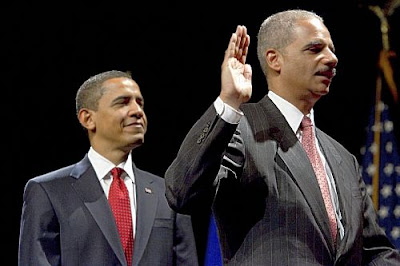 “Oversight of the U.S. Department of Justice”

The Senate Committee on the Judiciary has scheduled a hearing entitled “Oversight of the U.S. Department of Justice” for Tuesday, November 8, 2011 at 10:00 a.m. in Room 226 of the Dirksen Senate Office Building.

By order of the Chairman.

Politico: Eric Holder: Effects of Fast and Furious will linger

FOX: Holder to Testify Again on 'Fast and Furious'

Another theme to watch for during the hearing is Democrats and Holder pushing a theory that lax gun control laws drove ATF agents to conduct Operation Fast and Furious. California Democratic Sen. Dianne Feinstein floated the idea during a hearing last week, even though it was the law enforcement agents responsible for upholding gun laws that facilitated the sale of weapons to drug cartels. Holder’s prepared testimony also mentions his belief that weak gun-control laws were a factor.

My favorite headline: Holder on 'Fast and Furious': Never again.

"Never again"!?!? Eric Holder taking the pledge on gunwalking is like Reinhard Heydrich swearing off Holocausts or Jeffrey Dahmer announcing that he is an enthusiastic convert to vegetarianism. Like every other criminal, Holder's not sorry he committed the crime (in his case to advance the gun control agenda), but he's damn sorry he got caught.

This Patrick Leahy goat rope ought to be an exercise in alternate realities, with the GOP trying to get the lying sumbitch to answer the questions under oath, and the Democrat gun-grabbers saying it is all the fault of "weak gun laws" and George W. Bush. There are rumors that Grassley has a document or two up his sleeve, but that's all they are at this point -- rumors. 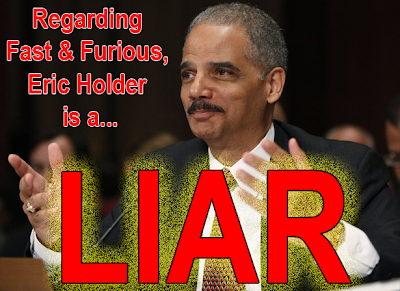 Heard an interesting blurb in news this morning. They arrested a Mexican LEO with an empty grenade (no explosive, just casing) and a a respectable amount of ammuntion at U.S. border crossing, but declined to prosecute him. They even refuse to discuss the case, as it doesn't even exist without an arrest. Hmmmmmm.

Possible Gun Runner? Guess we'll never know, happened in the Rio Grande Valley of Texas if you want to investigate.

So did you watch Heavy Metal again last night?

How can you tell when a Marxists is lying? Their lips are moving!

Oh, and he's also a Lawyer, so that means he's an accomplished liar!

I'll be sure to miss the entire thing! But I haven't missed a thing. I promise you,

I'm paying a bunch of Marxists to lie to me because I have no choice but I don't have to watch them. Yet.

just watched the tongue bath ny the dihmiwits and the Holder's deer in the headlights vis Cornyn's 'Has anyone at justice been held responsible?' Holder duhh ba huh da

They had to know the timeline was going to be there and their letter was a pack of lies 'inaccurate' isn't going to cut this time.

It does serve to illustrate how corrupt the dhimiwits are vis oversight of this injustice dept.

The DOJ often says, "We won't know all the facts until we indict people" - And so it will be in this fiasco which is nothing less than a bunch of people committing involuntary manslaughter

I do beliee we are in agreement concerning the AG Holder.

The bastard really DOES look like a weasel or a ferret in the face. Only not as intelligent, of course.

I'm just waiting for the day that I see Obama/Holder and the rest of the regime removed from power,one way or another.It must happen; we can't allow this bunch to ''rule'' for another four years...