The LA Times corrects the Georgia Geriatrics story. (Un)Democratic Underground smells a conspiracy. How many interviews does a "commentator" make? 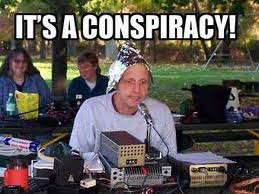 Don't tell anybody, but I have apparently exercised my formidable mind powers to force the LA Times to post a correction. Caveat lector. (Let the reader beware.)

[For the Record, 10:56 a.m., Nov. 3: An earlier version of this post misidentified Mike Vanderboegh as a Fox News "commentator." Vanderboegh has been interviewed for Fox News stories, but is not affiliated with the news network.]

Ah, but the Undemocratic Underground is not happy. They smell a rat: "Someone convinced LA Times not to describe Vanderboegh as a Fox News 'commentator'"

They ask, "Wonder who would do that?"

ET Awful writes: "He's not a commentator, he's just been asked to comment frequently on issues for money." For the record, I have only been interviewed by FOX News twice and I have never taken money from anybody for an interview my entire life. Period.

I think, however, that this puts the collectivists over there firmly into the "conspiracy theory" camp.

Citizen of a Differn't State said...

Semantics schemantics. Someone who makes a comment is a commentator while someone who is a regular is an anchor or a reporter or a "special" reporter. It seems that DU is comfused, or wants to split hairs depending on what your definition of is is.
Commentator over and out.

Speaking of Fox News, here's a quote from David Boylan: "We paid $3 billion for these television stations. We will decide what the news is. The news is what we tell you it is." I guess the LA Times doesn't want Mister Vanderboegh to be part of that "We."