Sipsey Street is happy to provide the background music for this post. Click on this Coasters classic as you read the post below. This song is reputed to be Eric Holder's favorite these days as his Gunwalker mental breakdown slowly advances. 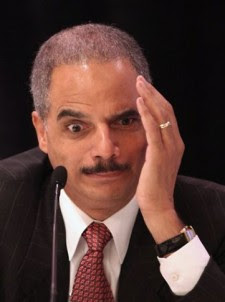 "Why's everybody always picking on me?"

"Holder lashes out at The Daily Caller while refusing to address growing calls for his resignation."

Embattled Attorney General Eric Holder today demanded The Daily Caller stop publishing articles about the growing calls in Congress for his resignation because of the failed Operation Fast and Furious gun-walking program.

As Holder’s aide was escorting the attorney general offstage following his remarks Tuesday afternoon at the White House, a Daily Caller reporter introduced himself and shook Holder’s hand. The reporter asked him for a response to the growing chorus of federal legislators demanding his resignation.

Holder stepped towards the exit, then turned around, stepped back toward the reporter, and sternly said, “You guys need to — you need to stop this. It’s not an organic thing that’s just happening. You guys are behind it.”

Holder then walked offstage without answering TheDC’s request for comment about calls for his resignation.

I think the guy is losing it.

Give a listen after the Coasters quit singing Holder's song:

There are no moral phenomenon at all, but only a moral interpretation of phenomena.--Friedrich Nietzsche.

The deed (running guns to Mexican drug cartels) can only be judged through the utilitarian prism of whether it furthers the goal of gun control. This cannot "work" if Holder is held to account for his misdeeds.

Holder is offended by reporters who demand transparency and accountability from government agents because if evil acts further "good" ends, the agents who commit them are blameless.

The State as Lawgiver is beyond good and evil and it will rule, not through consent of the governed, but by brute force.

Well, it could be that there is a very (very, very, very very very) remote chance Pornstache will have to answer to 200 plus counts of conspiracy to commit murder and two counts of negligent manslaughter. That incredibly remote possibility may be eating at him. I hope.