A tip of the boonie hat to Irregular Patrick H. for forwarding this image: 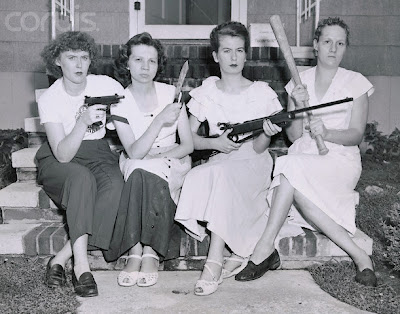 First an explanation of spelling from Highbeam.com:

And you would be right, though the names of the original grain mill and the Silver Spring community are spelled differently -- a source of confusion and consternation to residents through the years. The disputed spelling is also the root of various spellings of businesses and facilities in the area.

The housing development, built just after World War II, uses Viers Mill, with an "ie." The family that owned the mill used, and still uses, Veirs, with an "ei." The county made an official ruling in 1967 that the road is Veirs Mill. But the local elementary school inside the development uses Viers Mill.

The Washington Post has this snippet of a history of Veirs Mill Village:

Veirs Mill Village was named for Samuel C. Veirs's 1838 grist mill, according to Roger Brooke Farquhar's 1952 book, "Historic Montgomery County, Maryland: Old Homes and History." The mill was "a large establishment which operated successfully for 75 or 80 years and provided a great market for farmers in surrounding areas."

The village that sprang up near the mill site was among the first post-World War II communities built with returning veterans in mind. In 1947 Harris Co. of New York developed the rolling 330-acre tract, completing as many as 10 houses each day. More than 1,400 identical, 27-by-24-foot white frame houses were sold for about $8,000 each.

From the ground-breaking, the subdivision created a ruckus.

In a 1947 article in a Montgomery County newspaper, the Sentinel, the Wheaton Chamber of Commerce labeled the houses "hovels." According to Jane Sween, librarian for the Montgomery County Historical Society, influential politician Brooke Johns called the homes "shacks and potential slums." Another writer called them "little crackerboxes, all in a row, unfit for human habitation."

But young World War II veterans and their families snapped up the boxy bungalows. Financing was at 4 percent and almost all the original owners bought the houses with government-backed mortgages.

Local resident John Hayden recalls something of the feel of the area at the time:

My great-grandparents came from Bel Alton, in Charles County in Southern Maryland, and that’s about the only part of Maryland where I haven’t lived. I am a Baby Boomer, a child of the ’50s and ’60s, a child of the suburbs. My family moved to a brand new ticky-tacky house in Wheaton Woods in 1952, put down deep roots, and multiplied. We were far out in the wilds of Montgomery County, in the 1950s. Veirs Mill Road was a two-lane country road, and so was Georgia Avenue. Veirs Mill Village was the first subdivision in those parts, built for World War II veterans and their brides and children, and Wheaton Woods was the second subdivision. The Veirs Mill Shopping Center was at the corner of Veirs Mill and Randolph Roads. (The shopping center is there today, but the stores have all changed.) It had an Acme grocery store, a Rexall Drugstore, a hardware store, Suburban Trust Bank, barber shop, a movie theater, and Esso gas station. My father would buy $3 worth of gas, pumped by an attendant with a change machine on his belt. Another attendant washed the windshield and checked the oil. Rockville and Gaithersburg were little farm towns. For shopping, my mother went to the big Hecht Co. Department Store in downtown Silver Spring. Hecht’s is long departed, but the distinctive building remains, big as ever.

And that, my disappointed readers, is all I know. An amazing photo, an intriguing caption and the beginnings of the backdrop of what must be a great story of the armed citizenry. If anyone out there has some more details of this skirmish, I would be grateful if you would forward them to me.
Posted by Dutchman6 at 7:11 AM

I grew up not far from Viers Mill Maryland, and have family not far from the area. Thank you for teaching me something new about my childhood stomping ground!

A little conjecture on my part, to wit:

The Korean Conflict (War) began on June 25, 1950. Many WWII Veterans were called up. Perhaps these four women were wives of four such men who were called up, and the criminal element, knowing this, figured they had easy pickings in this little village suddenly bereft of the men of the house. The fighting spirit of these women speaks for itself.

I hate to be the spelling/grammar-nazi, but....

Was that article written by an 8-year-old? from a public school??

Does the WT no longer have an Editor??

All of the ladies look to be Battleaxe Lil's, I sure wouldn't talk rude to them even if they weren't holding weapons. lol

Wonder how the ladies would defend themselves today with the highly restrictive and onerous firearms laws in MD? Much less the likely nasty response from the police if citizens dared to defend themselves, especially with a dangerous weapon...

Times change, people do not. The framers of our Constitution knew that. Why can't folks understand this??

Did you receive the news article I sent?

The Big man from Boston