An example of Mexican dark humor? "President Obama is Urged to Stop Flow of Arms Across the Border." 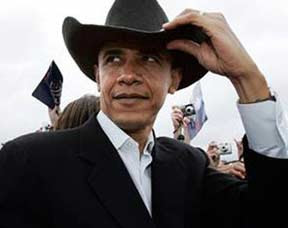 El Presidente: the Gunwalker in Chief.

The Justice in Mexico Project reports that "President Obama is Urged to Stop Flow of Arms Across the Border." A protest of Operation Gunrunner? No, of course not. What they want is more restrictions on American firearm owners. They want the Gunwalker in Chief to crack down on US.

Civil organizations in Mexico and the US are working together to urge President Obama to stop the flow of arms from the US across the border into Mexico. This campaign has become known as “Alto al Contrabando de Armas” (A Stop to the Smuggling of Arms) and it hopes to significantly reduce drug violence in Mexico as well as increase security in the border region. Some of the main organizations leading this movement are Alianza Cívica (Civic Alliance), Centro Nacional de Comunicación Social (Cencos), Evolución Mexicana (Mexican Evolution), and Propuesta Cívica (Civic Proposal). According to Milenio, from 2004 to 2008, 84% of weapons found in crime scenes were imported from the US.

There are three main policies that the campaign “Alto al Contrabando de Armas” has proposed. The first policy calls for the “immediate detention and prohibition of imported arms into the US.” The second policy calls on the Bureau of Alcohol, Tobacco, Firearms and Explosives (ATF) to closely monitor people who are buying multiple arms at once. Salesmen are urged to report to the ATF when such an instance occurs. The last policy involves giving the ATF an increased role in border state regions so that they can better regulate the arms that are brought into Mexico. Sergio Aguayo, socio fundador de Alianza Cívica, has stated that although these policies will not end violence, these efforts will surely have a significant positive impact on reducing the amount of violence that Mexico experiences and it will make it harder for organized crime groups to equip themselves.

This is not apparently an example of Mexican dark humor. I left this comment, which is "in moderation":

You might want to insist that the elected federal representatives of both countries investigate the sordid and murderous scandal known as "Project Gunrunner" before giving more power to the same agency (ATF) which, by the testimony of its own agents, facilitated the smuggling of thousands of weapons south of the border. This official government policy of depraved indifference to murder has cost the lives of (at a minimum) hundreds of Mexican citizens and at least two U.S. federal law enforcement agents.

Or was the circumscription of the rights of honest American gunowners the ONLY thing you had in mind?

If it is, then have the honesty to say so and don't try to cloak it in phrases of well intentioned horse excrement.

Has hallmarks of a well coordinated effort between elements in Mexico and the U.S. regime to expand registration and reporting.

Too bad Mexico will never see regime change... in their own nation.

On the other hand, maybe the flow of arms into Mexico from around the world is a pretense to regime change? Maybe the Mexican .gov barons cartel is simply taking steps to protect themselves and their privileged positions?

The "Justice in Mexico Project" isn't interested in a dialog - they just want to spout off their propaganda. No comments are shown.

The Justice in Mexican Project wants to stop the flow of arms into Mexico?
Easy.
Disfund & disband the BATFEces.

Beagle2 - nailed it!
Reports on FOX today showed that the US sold more 'small arms' (ala the UN definition) to Mexican government entities than they did to Iraq last year.
So in a way the JiMP folks are correct.........just going after the wrong 'sources'.