All Points Bulletin: Be On the Lookout for a missing Nigerian penis. Is this is what happened to Wayne LaPierre? No, that's a testicular robbery. 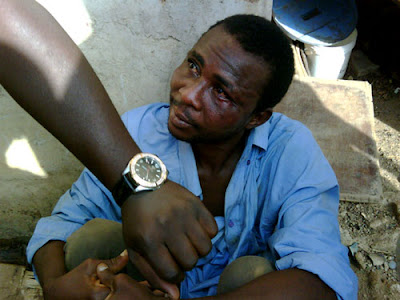 A 39-year man, Luka Audu was caught Saturday, May 7 at Ungwar Pama, Kaduna after being accused of alleged disappearance of a 17-year old teenager’s penis.

The boy told P.M.NEWS that he raised alarm that his penis had disappeared after the suspect, Audu shook him around 8.30a.m. today.

The boy whose mother refused that his name be mentioned was immediately taken to Faith Clinic to be tested while Audu was detained and asked to return it or risk being killed.

The mother told P.M.NEWS that she took him to the hospital to confirm whether or not her son’s penis is still functioning.

According to her, he didn’t respond effectively after the injection. And so she insisted the suspect must return the penis.

Narrating to P.M.NEWS, Audu the suspect said he came into Ungwar Pama from Narayi to see a friend . But he couldn’t locate the house, so he decided to ask the boy who directed him.

Audu further narrated in Hausa language: “I only shook the boy’s hand to thank him and nothing more.And I was leaving for the described place when I heard ‘thief, thief’ and before I turned some boys started beating me.”

He explained that the boys insisted he was responsible for the disappearance of the boy’s penis and so he must returned it or get killed.

When P.M.NEWS asked him to return it if truly it has been confirmed that something is wrong with the boy’s penis, Audu simply said: “I swear, I don’t know anything about it.”

It took the intervention of P.M.NEWS reporter and some elders in the area before the suspect was handed over to the police.

The police appealed to the angry youth who threatened to kill the Kebbi State-born suspect and gave assurance that the allegation of penis disappearance would be properly investigated.

Now, if we could just find out who hijacked Wayne LaPierre's testicles. . .
Posted by Dutchman6 at 9:29 AM

What makes you think he had any to begin with?

I once found one of my daughter's little male friends in my house in the middle of the night. Seems she had let him in - and you can be certain it was utterly without my permission.

Anyhow, after promising to deal with my daughter, I grabbed the little bastard by the seat of the pants and scruff of his neck/shirt, marched him through my house and tossed him bodily into my front yard. Then I told him that if I caught him in my house again - EVER - I would turn him into a Ken doll. He yelled that if I did that I would go to jail. My reply was that even so, I would get out of jail before his junk grew back.

I never saw him again. My daughter was on house arrest - excuse me grounded - for a month.

You dads with pre-teen daughters remember this. You can be paroled from prison but penii and testicles/scrotum don't grow back!

Mike, please do not ever, ever, ever shake Wayne LaPierre's hand.

I believe a previous post on this site told a story about an extra "member" found after an IRA bombing gone wrong. So yeah, it was half the world and many years away but hit TV shows have been made out of less!

The truth is out there!

As for Wayne's allegedly missing body parts, has anyone asked Hillary? Rush says she collects them.

Doesn't The Peter have two assistants who follow him around everywhere?

Not to worry, it's just another civilization, virtually interchangeable with our own.

My government told me that, they're here to help.

They are totally effin' nuts over there. Look at THIS!

Africa is rife with such "witch doctor" stories. Science says, unless there's a knife or corrosive chemicals involved, penises do not just "disappear." That said, I agree: Wayne needs "cojones" ("stones"). Thank God for our other pro-gun groups: the always-active Second Amendment Foundation and state-level pro-gun orgs who are 100X more vocal, active and focussed than NRA. Lean on NSSF and SAAMI as well to support anti-ATF measures.

wv: nadmi Or not. Use your imagination.