From Brother Art, who forwards this image of a DHS patch: 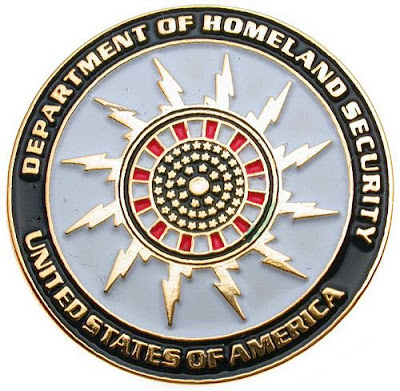 I present to you a patch for the 3% that may want to proclaim the fact that this is a two-way street. Above design ripped from a pin I saw somewhere awhile back ... I think my version has a touch mo' truthiness.

Here is his design: 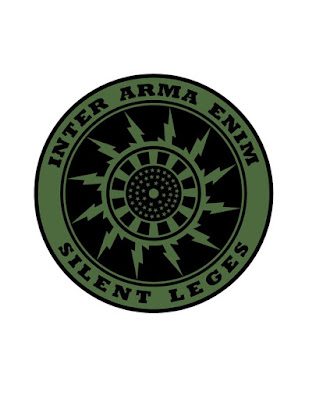 Inter arma enim silent leges is a Latin phrase meaning "For among [times of] arms, the laws fall mute," although it is more popularly rendered as "In times of war, the law falls silent." This maxim was likely first written in these words by Cicero in his published oration Pro Milone, although Cicero's actual wording was "Silent enim leges inter arma."

At the time when Cicero used this phrase, mob violence was common. Armed gangs led by thuggish partisan leaders controlled the streets of Rome. Such leaders were nevertheless elected to high offices.

Which, if you think about it, cuts both ways.

How do you say " In war, the law means nothing survival, everything" in Latin.

Surely someone must have uttered these words in some form, in antiquity?

OMG! Are the DHS retards handing out challenge coins now?? I didn't realize they were a military force. They need to come to terms that they are not, and would fall under the DOD if they were.

Would it work to use the outline of an M1 bolt for the circle inside the lightning, then place the stars and stripes on the bolt face? Or would that be too jumbled for a patch?

Thank you,
Yours,
B Woodman
III-per

SUPERB piece of work - I want a dozen!!!
What I find especially wonderful is this: any student, even a casual student, of WWII, will immediately recognize the Nazi's "Black sun" motif as being the basis for the Department of Homeland Stupidity's design. So the new 3% design is a direct mockery of their adaptation of a Nazi symbol. the irony is priceless.

But forget the Latin. Just say it in Redneck so all can understand.

Trouble is, they seem to know enough not to precipitate a sufficient reaction. Incrementalism has worked for a 100 years. Why should they blow the plan now, when they're s close to their goal?

In other words, we can wait until it's too late (already?) while hoping for the precipitate, instead of initiating the solution.

wv: pubfull. Where one would find a variety of opinions as to possible solutions.

If you have made this up into patches, I would like to buy a couple. Just let me know...

We got armed mobs now. They got badges and immunity. And as Aughtsix stated they've been using incrementalism with spectacular success. They take us out one at a time, one compromised or honeytrap group at a time, one gun shop, one gun show, one weapons type, one source of arms at a time. They can play the long game if they have to.


What I find especially wonderful is this: any student, even a casual student, of WWII, will immediately recognize the Nazi's "Black sun" motif as being the basis for the Department of Homeland Stupidity's design. So the new 3% design is a direct mockery of their adaptation of a Nazi symbol. the irony is priceless.

Damn! I was curious enough to look up the Black Sun used by the SS. It's damned scary, but it is rather transparent, isn't it?

I have them on my desktop now, but I can't seen to get them to paste to the comment section here. Maybe Mike will do it for us. I found the Nazi Black Sun on Wikipedia, so if you want to look there, go ahead.

Linked and quoted at http://greenmnts.blogspot.com/2011/05/in-times-of-war-law-falls-silent.html