ATF napalms bunny rabbits: Motley Co. Attorney says, "I will say this and you can quote me on it. That bunch had a real corner on stupid." 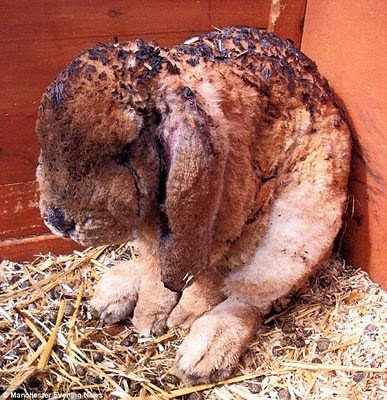 Bugs Bunny's cousin Jack huddles in fear after ATF terror raid. Comments Jack, "We thought we were safe. Their raid jackets said ATF not FBI. After Waco, we thought it was the FBI who were the arsonists. I'm calling PETA just as soon as my singed fur grows back in."

Readers from yesterday will recall that the ATF set off some sort of incendiary device (or devices) over top of a jack rabbit warren in Texas, which led to flaming bunnies streaking off in all directions, burning at least 150 acres of wheat fields.

You've probably heard of having a corner on the market?

The Motley County Attorney says agents with the Bureau of Alcohol, Tobacco and Firearms have the corner on something else.

ATF agents were blowing up old and unusable ordinance in Motley County Tuesday afternoon, when they ignited a blaze that consumed 100 to 150 acres.

(MBV NOTE: "Ordinance"? They were burning up old laws? Perhaps they meant to write "ordnance.")

"I will say this and you can quote me on it. That bunch had a real corner on stupid. We had high winds. We're under a burn ban because of extensive prairie fire, brush fires, and in they roll with the idea of blowing up things and giving no notification to our Sheriff. We've got a few residents who thought there might have been a terrorist act going on. To do all of that with a burn ban in effect. I know a bunch about explosives from my military career and it doesn't take a rocket scientist to know that explosives cause fires. We had a very good wind blowing that evening also. On top of that, we've got the federal government that has refused to provide assistance to the state on the request of Governor Perry because of all our statewide fires. Then in waltzes federal agents and they start a fire. That to me is a corner on stupid," Edwards said.

Edwards said he's still investigating the burn and tallying the damage and response costs which he said the ATF promises to reimburse.

Edwards also told FOX34 that an ATF administrator has apologized to the Motley County Sheriff for not notifying him of the exercise.

The ATF detonated explosives on private land that they say is leased for research by Texas Tech and Homeland Security. During one explosion a wheat field caught fire and burned 150 acres.

The ATF says it takes complete responsibility, but Motley County Attorney Tom Edwards says the incident is inexcusable. "We have a government that has just refused aid to the state of Texas for all our fire damage throughout the state. Here comes federal agents who start another fire," Edwards said.

Edwards said the investigation is ongoing, but the ATF could faces charges for violating the county's burn ban. That is a Class C Misdemeanor.