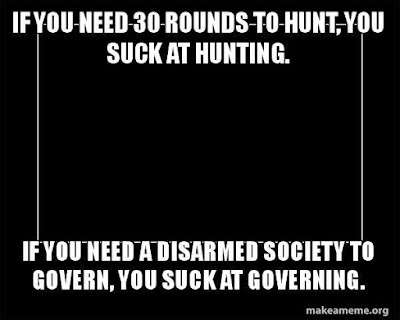 I shared this picture on facebook and it received (for me anyway) a fair amount of attention.  With nearly 300 400 500 "likes" and well over 1000 2000 3000 shares, I have been able to track how people interpret a meme that I think is fairly self-evident.  Most people got it.  Some, to my surprise, did not.


I will numerate a few of those that just "did not get it".  These quotes are taken directly from Facebookers that shared the meme.  All painful syntax errors have been left.  I have to share the pain somehow.


1.  "You wrong no guns not even for cops. Yea Hillary . I love that girl" - For so many reasons, I hope you choke while you eat a giant bag of dicks.  Asshole.


2.  "Yet another attempt by weak-minded NRA minions the further the paranoid, hysterical, fallacy that "da guvment is gunna take yer guns". NOBODY, NO rational person, wants to take away everyone's guns. What sucks is that 2nd Amendmenters apparently lack the critical thinking skills necessary to recognize this." - Yes they are trying to prevent private ownership of firearms.  Stop being obtuse.  Also see #1.


3  "The 2nd Amendment has NOTHING to do with hunting. (Just saying)" -  No one said it was.   However, any restriction on standard capacity mags should be met with bitter scorn and willful disobedience.  Just saying.


4.  "Incorrect on 30 rounds for hunting if your hunting hogs you need 30 rounds maybe more depending on size of herd and if they're coming at you" - No one cares.  See #3.  Just saying.


5.  "and if you need a gun to feel free you suck at freedom" -  If your only contribution to the country is to throw spitballs on social media, you suck at freedom.  Also, I need to have a gun because I suck at being a slave.  Where does that put the people on the other side of the debate?


6.  " If you need a gun to kill someone, you suck at murder! Box cutters got 3000 on 9/11. The most dangerous weapon is your brain. If you hate enough to murder, you can carry it out." - Socialist governments were responsible for over 260 million murders last century.  The most dangerous weapons are "greater good" assholes like you that load people on cattle cars.  That is quantifiable.


I did find it amusing to see one anti-freedom prole in debate with another anti-freedom prole over certain nuances of gun control.  It was like watching chimps try to use tools for the first time.  They understood some rudimentary concepts but they have no idea of the purpose.


None of them understood the "why" of the debate.  They understood to a certain degree the "how" and the "what".  The "why", as in why would you demand your freedom to retain the most basic human right to self defense, had them at a loss.  Until they figure that part out, they will just not get it.

There should be some sort of I.Q. test before allowing an opinion to be stated in regards to the meme.

(Until they figure that part out...) They will be on my personal "Watch List"

The most immediate compelling reason to own a semi-auto 'man hunting' rifle is how it makes liberal assholes clinch up tight in fear.

I still think the best, most concise, and perhaps oldest response is:

"μολὼν λαβέ" -- Leonidas I of Sparta

Been getting a lot of that same crap from libtards on LinkedIn. The mantra that "no one wants to take your guns!" seems like a valid talking point to the uneducated.

I usually just post this article to shut them up:

It generally covers all the major, documented times where the left admits that whatever gun control bill is in vogue at the time, the true goal is full gun control and confiscation.

Feel free to bookmark and use it and if you can't see the link, Matt....let me know here with a reply and I'll send it to SSI@gmail.

Ya, an IQ test would be *brilliant*....right up until the government is the one in charge of the testing....and guess what, you failed. No vote for you.

Seriously? You guys are the ones with the limited intelligence if you think that's a good idea.

This is graduate level stuff compared to "comments" found at Yahoo and their Clik-Bait subcontracted leftist scribes. You want to see the depths of the leftist fecal sludge basins? Yahoo will show it. The climb, IF we somehow avoid outright social and economic chaos followed by armed civil insurrection will indeed be difficult. But I know the "character" of the collectivist serpent never as nakedly displayed as the past 5-10 years led by the Muzloid. And I know my Jewish King is watching. He will guide us as long as we remember that in order to receive His Grace we must be and remain under His authority.