A Reader Sends: Fourth Generation War Comes To America: What Are You Going To Do About It? 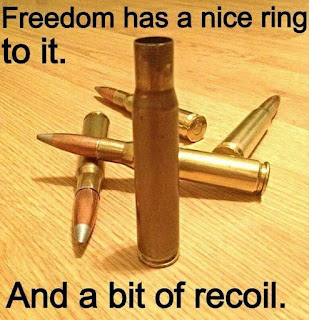 Fourth Generation War Comes To America: What Are You Going To Do About It?

The article deals specifically with islam; a 1600 year old threat that most Americans view as very distant and ephemeral.  Submission, whether it is to a bureaucrat or an imam is one in the same.  You are a given a choice of easy, apathetic submission or a never ending battle to politically, spiritually, and physically keep your God given rights.


"Orlando is not the first mass shooting by a so called ‘Lone Wolf’ Islamic Jihadist in America; it’s the seventh in recent years but this one is different. The knee jerk reaction from the political left and their media enablers has (unbelievably) gained traction in the establishment media. The Orlando massacre has nothing to do with guns; decreasing the civil liberties of law abiding Americans is not the answer. A majority of the American public knows this and are dismissing the governing elites attempts to spin this attack for political advantage out of hand. The problem is Islamic Jihadists and the fact that they are embedded inside our society and are going to, with ever increasing frequency, attack the citizens around them in the name of Allah. It’s what they do."

In regards to this matter of the possession of "God-given rights," and their removal by those with the power to do so: Many years ago the same thing happened to a man named Gideon and to his countrymen, irritating him to the point of asking: "If the Lord would be with us, why then has all of this happened to us?" (See the biblical book of Judges 6:13.)
The obvious answer to this is also the biblical one: "God no longer is for us, but against us. He is punishing us through the evil actions of men on earth whom he intentionally has moved to punish us by taking from us specifically our God-given privileges, since we no longer serve him with our hearts and minds, keeping his threat, 'Because you have forsaken the Lord, he also has forsaken you'" (2nd Chronicles 24:20).
For instance, if a kindly father, in order to show his son respect and encouragement would loan to his son a prized rifle that had a walnut stock with a high gloss finish, a gold bead front sight, and with delicate scroll work on a silver nitride receiver, yet his son would go out and simple use it for a pry bar: what would that father do? He will revoke his son's privilege, and take back that rifle.
This is simply what the Almighty is doing today. He is revoking his privileges which he gave to our once gospel-loving nation in the past, because he no longer is for us, but against us.
So instead of focusing on and blaming the federal government, which is simply the messenger which God is using to carry out his wrath, and of trying to shoot the messenger to get rid of the problem, Americans need to look in the mirror at the real culprit. But so far their pride has prevented them from doing it.
In the past our Christian nation would appoint days of humiliation and repentance for such occasions. We citizens should do so today.

I agree with Gene....we have rejected the Father's yoke, so He will give us the yoke of a weak master (the current governing class) and after the weak master's defeat, He'll follow that with the yoke of Allah (actually Satan).

If you thought obeying the commandments was too much work and too difficult a burden (yoke) to wear....just wait until feel the yoke of Islam. Talk about a loss of freedom and adherence to religious rules and customs.

Well, I look at it this way. If the local imams want to inflame the jihadis and send them out to attack us, then we need to reciprocate the favor and precision pinpoint in kind.
The local mosque that riled up Mateen is already known. I'm sure that the head imam's home addresses can be found. It won't take but one or two rounds downrange drive the message home (ahem). And then slip away into the darkness.

Excellent article that was marred by his citing Gavin de Becker's
book "The Gift of Fear" as an 'essential book'.

Kenneth Royce qualitatively demonstrated that de Becker is a gunphobe who presents his elitist views via ‘The Gift of Fear’.

IMHO, Gavin de Becker can plant himself and his book on the nearest cholla cactus
and rotate at 20K rpm.

IMHO, "The Gift of Fear" isn't even worth the .50 that Royce paid for his copy!

Yours In Liberty! islam must be destroyed!
NorthGunner III