Anybody in the Flagstaff area want to ask US Attorney Dennis "Iron River" Burke a question about his role in Gunwalker and the Terry murder? 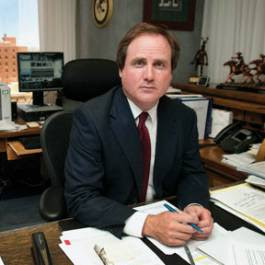 Mr. Banality of Evil himself.

Because he's going to be right here.

According to information from Sunnyside-Southside Weed & Seed, the event will begin at 6 p.m. at the Murdoch Community Center, 203 E. Brannen Ave., in Southside. The forum is part of an ongoing series of events across the state focusing on federal civil rights laws. Among the topics are: Official misconduct, new federal statutes on hate crimes, increased community outreach efforts and the creation of a Civil Rights Unit.

The forum is an opportunity to educate people on their civil rights and to give people information on the role of the U.S. Attorney and the Federal Bureau of Investigation in prosecuting violations of civil rights.

The event is free, and everybody is invited to attend. For more information, call 213-5900.

"Among the topics are: Official misconduct." Oh, yeah. I'd love to ask the SOB about official misconduct, seeing as how he has such a personal acquaintance with it and all. Too bad I can't hop a plane and ask him myself.

Be sure and get some cell-phone footage while this federal criminal squirms under the questioning. That would make a GREAT YouTube video. Remember to keep your temper and don't get suckered into breaking any laws. The SOB is asking for questions on official misconduct, just be sure and give him some GOOD questions.

Ask him the kind of questions that Brian Terry's family would ask.
Posted by Dutchman6 at 8:50 PM

I now have a healthy dose of Pepsi up my sinuses, across my keyboard, and all over my monitor!

It's not the first time and it's your fault!

Ask him the kind of questions that Brian Terry's family would ask.

That's the last newspaper mention of the event. I hope I'm not the only one who finds this curious.