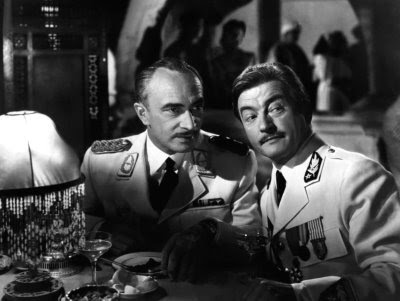 So, today is Conrad Veidt day on Turner Classic Movies, and I got hooked on Contraband, a movie that Veidt made after his emigration to England escaping the Nazis of his homeland. Many of you will recall him as the evil Gestapoman in Casablanca. It is ironic that Veidt ended up playing many Nazi roles after fleeing Germany, for he was a consummate anti-Nazi. Veidt had long been known in German theatrical circles as a staunch anti-Nazi and the Gestapo had him marked down in their roll of honor as someone to "deal with" from the beginning of the Nazi regime. His activities were noted by the Gestapo, and a decision was made to assassinate him. Veidt found out about the plot, and managed to escape Germany before the Nazi death squad found him. He even arranged to have his ex-wife and their daughter moved to Switzerland to avoid Sippenhaft.

In Contraband, he plays a Danish sea captain and is actually the hero of the movie. 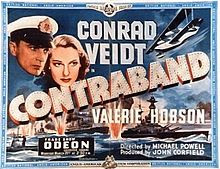 Veidt is best remembered for his roles in the silent films such as The Cabinet of Dr. Caligari (1919), The Man Who Laughs (1928) -- his performance was later used as a basis for the film portrayal of The Joker in Batman -- and then in the talkies The Thief of Baghdad (1940) and Casablanca (1942). Wikipedia reports:

He was born Hans Walter Conrad Weidt in a working-class district of Berlin, Germany, the son of Amalie Marie (Gohtz) and Phillip Heinrich Veidt.[1] (Some biographies wrongly state that he was born in Potsdam, probably on the basis of an early claim on his part.) His family was Protestant.

In 1914, Veidt met actress Lucie Mannheim, with whom he began a relationship. Later in the year Veidt was drafted into the German Army during World War I. In 1915, Veidt was sent to the Eastern Front as a noncommissioned officer and took part in the Battle of Warsaw. He contracted jaundice and pneumonia, and had to be evacuated to a hospital on the Baltic Sea. While recuperating, he received a letter from Mannheim informing him that she had found work at a theater in Libau. Intrigued, Veidt applied for the theater as well. As his condition had not improved, the army allowed him to join the theater so that he could entertain the troops. It was also during this time that his relationship with Mannheim ended. In late 1916, he was reexamined by the Army and deemed unfit for service; he was given a full discharge in January 1917. Veidt then returned to Berlin to pursue his acting career.

Veidt fervently opposed the Nazi regime, motivating him to emigrate from Germany in 1933 a week after marrying Illona Prager, a Jewish woman. He settled in the United Kingdom, perfected his English and became a British citizen in 1938.

He continued making films in Britain, notably three with director Michael Powell: The Spy in Black (1939), Contraband (1940) and The Thief of Bagdad (1940).

In the 1940s he moved back to Hollywood, California, and starred in a few films, such as Nazi Agent (1942), in which he had a dual role as a Nazi and as the Nazi's twin brother, but his best remembered role was as Major Heinrich Strasser in Casablanca (1942). He found himself invariably playing the very characters he detested.

He died suddenly of a heart attack in 1943 while playing golf in Los Angeles. In 1998, his ashes were interred at the Golders Green Crematorium in London.

It has been reported, though not verified, that Veidt identified himself as Jewish on Nazi questionnaires as an act of protest. This may be the source of inaccurate claims that he either converted to Judaism or was Jewish by birth. Conrad Veidt married three times, his first marriage to Augusta Holl, a famous cabaret entertainer known as "Gussy," took place on June 18, 1918 and ended in divorce the following autumn. Gussy later married German actor Emil Jannings. Veidt married a woman from an aristocratic German family, Felicitas Radke, in 1923. Their daughter, Vera Viola Maria, called Viola, was born August 10, 1925. His last marriage came in 1933, to Ilona Prager, called Lily, and lasted until his death.

He loaned his considerable fortune to the British Government and donated large amounts of his film salaries to help with the British war effort.

Here is an homage to his film roles:

I think that his utter believability as a menacing Gestapoman -- which helped carry off many an otherwise cheesily-plotted war-time propaganda film -- was a direct result of confronting the real thing in young Nazi Germany.
Posted by Dutchman6 at 9:20 AM

Good to see you rounded up 'the usual suspects'.
A great man and fine actor. I just re-watched Casablanca last week!

In the silent pictures, note how hands do much of the talking. Greta Garbo has few peers at this and her salary reflected the mastery of this technique. :^)

Mike, if they inform you that they have a complete dossier on you, be sure to ask them if your eyes are really brown.

He reminds me of an actor in todays movies. Does he have grandchildren who act?