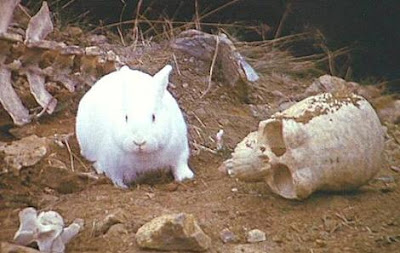 "I *warned* you, but did you listen to me? Oh, no, you *knew*, didn't you? Oh, it's just a harmless little *bunny*, isn't it? -- Tim the Enchanter in Monty Python and the Search for the Holy Grail.

"All the signs suggest that Obama is in immediate danger of a rabbit attack."

"I think it's a little too early yet for the president to be attacked by a rabbit," cautioned a veteran Chicago Democrat wise in the ways of Obama. "But it's close. Real close."

Anyone who thinks Obama is safe from a rabbit attack has forgotten what happened to President Jimmy Carter In 1979. Carter was attacked by a swimming rabbit, and the subsequent "Killer Rabbit" stories helped destroy his presidency. It led to the election of Republican Ronald Reagan in a landslide and an unprecedented economic revival.

There are eerie similarities. Like Obama, Carter was at that point where he was constantly viewed as weak and ineffectual. His fellow Democrats had lost patience with him. Liberal writers who once fawned on him had turned against him.

And like Obama, Carter foolishly left the White House for a "vacation." Carter went home to Georgia for some fishing. Once his canoe hit the water of a pond, a terrible thing happened. A rabbit swam near with anger in its eyes.

The story was reported by the Associated Press, and the papers picked up accounts of the "Killer Rabbit." Network news operations jumped on it too. Here's the top of the original story:

WASHINGTON (AP) — President Carter beat back an attacking rabbit with a canoe paddle when it swam at him as he fished near his Plains, Ga., home last spring.

Of course, there are "killer rabbits" to be afraid of:

You ever been BITTEN by a rabbit?! Hurts like billy blue blazes!! Took several minutes for the cut to stop bleeding (of course I WAS on coumadin at the time)!

I was in the Far East (serving my ungrateful country) at the time of Carter's "rabbit attack". Exactly what happened? And were was his Secret Service protection detail? And how sick was the rabbit for Jimmy E. to have been able to fight it off?

The difference is that the media reported on the Carter incident. What are the chances, should something similar happen to Obama, that we'd ever hear a word?

Wasn't that Barry in the cockroach clip?

"Roger the Shrubber: Are you saying Ni to that old woman?

Roger the Shrubber: Oh, what sad times are these when passing politicos can say Ni at will to old ladies. There is a pestilence upon this land, nothing is sacred. Even those who arrange and design shrubberies are under considerable economic stress in this period in history."

Ahh, the medieval ages. What nostalgia!