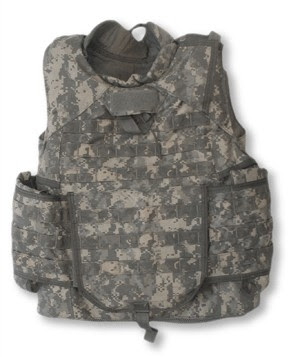 Sources close to the investigation told 8 News NOW that FBI officials and SWAT teams seized guns, body armor and MREs, or ready-to-eat meals during the raid.

Over at ARFcom, a poster reported:

I saw a guy in af camo there quite a few times with a duffel bag full of crap to sell.

2 from my squadron were taken in by OSI today. Wonder if it is related.

I have warned about this sort of thing before, but beware of "can't miss" deals on body armor and night vision. The military goes to great lengths to get that stuff back, and the ATF trolls with it as well, seeking whom they may devour.
Posted by Dutchman6 at 6:05 AM

Besides, military body armor is heavy, bulky, cumbersome, and wholly unsuited for use by guerrillas, except when masquerading as government troops in pseudo ops.

There's a big difference between taking home gear that was issued to you and used by you that may have not gotten turned in (field jacket, gore-tex, sleeping bag, cleaning kits, generally "expendable" personally-used items without a lot of military value when in "used" condition, including MRE's that you paid for or missed meals for) and useful military hardware and supplies in quantity. Folks DO get away with the 2nd kind of stuff, but it's 1. theft/possession of stolen property/evidence of a bigger crime, 2. really stupid to attempt to re-sell it, 3. even more stupid to buy it from walk-in folks and attempt to retail it.

I would bet that all on-line auctions offering or showing what looks and is priced like current issue armor, "real" & fresh MRE's, or Mil-NV are investigated and logged, even if no action is taken. Military surplus stores likely are on routes for "paid informants" looking for the same kind of goods. So far, individuals who might have bought gear at a retail location or on-line store or merely holding/wearing/owning gear that might be/have-been US Gov Property are not actively (as in a national propaganda campaign) being sought for prosecution. That shoe is probably on the way down to the floor now.

This is another reason to pay cash for nearly everything. It's the easiest OPSEC technique, forcing them to at least follow you to the car and write down the plate number.

Sounds like they had a bait retrieval. The armor and rations were more than likely intentionally allowed to disappear with the hope of catching some people buying stolen goods. Not exactly the most original bait and trap in the world.. Too random even when known suspects shop at the store... Sounds like an FBI trick. Amateurs.

Times are so bad, even MREs are now worthy of theft?

What I can't believe is the number of fools saying "THEY CAN'T DO THAT"
when "they" by god can and will.

Regardless of whether it's legal or not. Remember, you gotta get one of "their" judges or a sheeple jury to agree with you.

As always, up and down range.

Cheap (stolen) armor is more expensive in the end. I'd go with something legitimate like US Palm armor. They're priced right and have different levels of protection. I don't work for them or affiliated with them in anyway. Just sharing what I've seen.

Fake stings. Well, Mike this might be your next assignment. Call this one...Night Vision Walker.

All body armor is not turned in. In many cases, troops are billed for their armor at the end of deployment. I have talked with a vet who was issued a new set every deployment and showed the docking of his pay for the gear he was issued. Gear bought from someone who has cashiered out and who paid for his/her gear is legitimate to purchase as it belongs to the soldier.

Now gear from active troops is much more risky to purchase as it fare more likely to be stolen. A body armor supplier from Texas, who sells lots of used mil armor to small town police and rural sheriff depts, told me he has been audited by the government 3 or 4 times and always passes muster because he only purchases armor from troops who can show they have honorable discharge papers and who attest that they have paid for the armor.

The Snitch reminds you that this is not legal advice and your milage may vary. This is nothing but a compilation of information gleaned from discussions with a recently returned vet, a federal agent, and a used body armor dealer.

I usually spend hours on the net reading blogs on various subjects. And, I really would like to praise you for writing such a fabulous article.I really like your way of information given.Thanks!

You could certainly slurp down some of the MRE Entrees on the move. Might be a mess, but Chili with Beans, Sloppy Joe, etc. could definitely be eaten cold, out of the corner of the pack. Some of the Entrees are in bigger chunks that wouldn't be conducive to eating that way. The First Strike Rations are hard to come by -- they are purely military issue, and to my knowledge aren't readily commercially available. ration MREs meals ready-to-eat