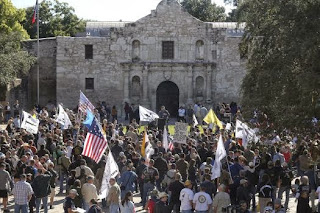 In violation of a city ordinance they called unconstitutional, hundreds of gun-rights activists set off from the Alamo on Saturday afternoon, displaying their firearms as they marched through downtown to Travis Park.

About a third of the 1,500 protesters that organizers predicted packed the Alamo grounds and spilled onto Alamo Plaza, armed with rifles, including the popular AR-15, shotguns and antique pistols. Most were flagged with an orange straw or piece of plastic that filled the chamber and prevented the gun from discharging.

Charged up and chanting, “Live free or die!” protesters at the Come and Take it San Antonio: Line in the Sand rally made their way to the park, a former Confederate hangout in the heart of the city. . .

Saturday's was an unprecedented rally at the Alamo sanctioned by Land Commissioner Jerry Patterson, who's in the midst of a contentious primary battle for lieutenant governor and whose General Land Office recently took control of the Alamo from the Daughters of the Republic of Texas.

The speaking lineup included Patterson, who insisted the event was not a political rally, and Alex Jones, a firebrand TV and radio host from Austin who blew out his voice midway through a frantic tirade warning of a “globalist” plot to take away Americans' liberties. . . 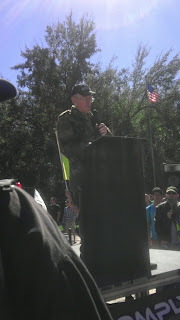 Jones, a so-called “Truther” who believes the 9/11 terrorist attacks were carried out by the U.S. government, whipped up the crowd with his telltale gravely bellow before his voice gave out, then warned that the U.S. is facing threats from a “globalist” army.

“They're not misguided liberals,” he said, “They're authoritarians who are arming to the teeth to take away our liberties.”

Patterson said he objected to sharing the stage with Jones, who has accused former President George W. Bush of orchestrating the attacks on the World Trade Center.

“Its really hard to push someone off the stage,” Patterson said. “He may have a problem sharing the stage with me, who is a big fan of George Bush.”

When asked whether he had his pistol in his boot, Patterson, who is known for carrying his firearm at the Capitol, responded: “Well, do I have my boots on?”


Mr. Patterson's anger is understandable. Jones wasn't on the speaker's list. He just parachuted in and somehow wangled a spot on the roster without warning.

And from the Daily Beast:

None of the other speakers, however, demonstrated the sheer rage of conspiracy theorist and syndicated radio host Alex Jones. Jones blasted gun control activists, slammed Congress, deplored globalization and compared Mexico to “a countrywide Chicago” before suggesting that Second Amendment rights extend to that nation, too. All rally long, Jones would wander about the demonstration grounds, hosting impromptu sub-rallies for a few moments before breaking up his own gatherings and returning his captive audiences’ attention back to the speakers on stage.

Better to be an Old Fart from Alabama than a polytick from DC.

What Dumbass wrote this?

We sure don't teach history anymore.

Those former Confederates must be mighty old now. Before that, was it a former Mexican hangout?