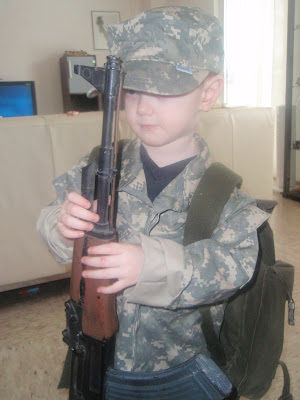 The latest from the Vanderboegh forward operating base somewhere in Germany:

Enclosed are pictures of Gabriel doing foreign weapons training. He said "Those of us in a civilian defense role should best look first to our midsections before we get into minute doctrine pissing matches."

Not even close to being three, my grandson is awful young to be having opinions on doctrinal disputes, but then us Vanderboeghs always were opinionated so-and-sos. 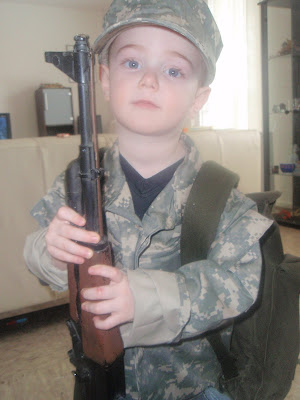 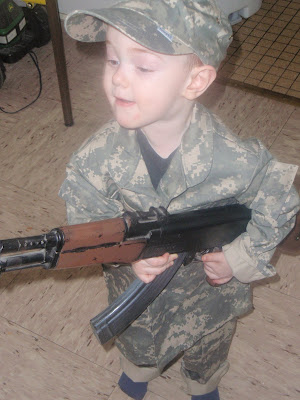 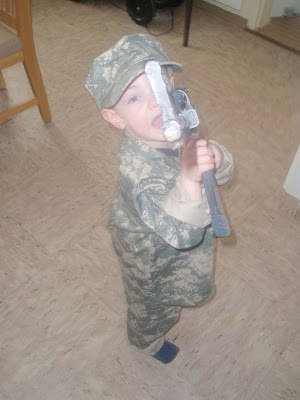 The rubber AK is a training aid that I bought off of a Special Forces sergeant over twenty-five years ago. I have pictures somewhere of Matthew, in VN era cammies and boonie hat with the same "weapon."

LATER: Many thanks to the anonymous Irregular who told me how to fix the photo orientation!
Posted by Dutchman6 at 7:09 AM

"He said "Those of us in a civilian defense role should best look first to our midsections before we get into minute doctrine pissing matches."

Well, you almost got me to piss myself laughing.. Does that count? But on a more serious note, good advice from a almost 3 year old!

Mike, flipping the pictures is quite simple on a windows machine. If the picture is saved on the computer,double click on the photo, this should open it in the Windows Photo Viewer. Bottom center of that window is a control panel, click one of the rotate buttons to turn. I tested it on my computer and it auto saved when I clicked the Next picture button. I hope this helps.

Train a child up in the way he should go.

Too funny. ANd too cute.

Perfect, I love it!

I'm assuming this cute kid takes after the distaff side of the family?

he'll kill us all