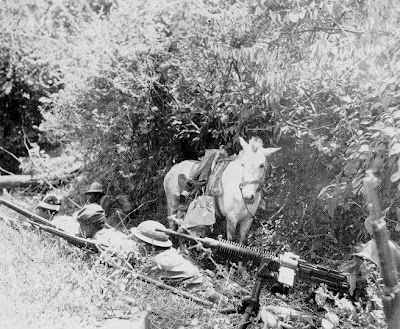 “Playing for the Breaks: Insurgent Mistakes” by Lincoln B. Krause from PARAMETERS, the US Army War College Quarterly, Autumn 2009, Vol. XXXIX, No. 3.
Posted by Dutchman6 at 6:52 AM

Prime example as to why we needlessly expend blood and treasure instead of using our heads. A damned fine read. And food for thought. Recommend it alongside Sun Tzu.

"Original sins are fundamental errors in the initial design of an insurgency. These mistakes, which handicap a movement from its start, include failing to adopt a viable cause, poor selection of operational terrain, restricting mobilization to a narrow ethnic or sectarian group, and adopting a strategy unsuited to goals, terrain, or opponent."

that would be the category i am most concerned with, which this paper does not concern itself with. maybe next time.

imprudent armed actions -- the case of anwar sadat is definitely classic, likewise the "mistaken identities" are constantly toeing this line. the brotherhood didn't ask itself quis custodiet, and i suspect that even if they had they failed to answer it correctly. the subsequent section, dysfunctional terror, reinforces the point: never antangonize "at any one time more people than can be handled." that's a good way to put it, but the relative value on different groups puts a lower bound on feasibility, too. one of six nameless bureaucrats will never be worth twice what one of twelve czars of the a-pustule is worth, even if action against either would equally enrage the group. one has to seek out the "bottlenecks," where increasing the group size, or otherwise reinforcing their defense, is widely unpopular in the public opinion.

the section on holding ground also reinforces the necessity of truth in 5GW. truth is the ground on which no evil can be victorious. physical ground is of little value when all your other values are dead. if they are built upon lies, poor logic, the enemy will be sure the public knows about it. either force the enemy to fabricate wildly fantastic lies about you, or have nothing to say about you at all.

the section on high stakes offensives is pretty important, especially in america where too many romanticize the revolutionary war as essentially one short burst of whoop-ass that was over before it began. in reality, your job is to make your offensive actions less psychologically and emotionally offensive to the bureaucrat-soldier than his own superior's commands. he must judge your values as superior. he must judge your actions as low cost or risk free, as nuisances, as defensive. he should not be allowed to believe he is paid enough to fight to protect someone else's wealth.

as for security lapses, why even have files? your organization is probably too complex if you have to write down even one name. one muster list and you already look like the ATF and not a protective neighborhood. don't you know your neighbors intimately?

hah! no kidding? let's see: insurgent groups overthrow established state influence in a particular geophysical area and then declare themselves the state, and states have formed in no other way throughout all of history.

so in other words, that would require 1) admitting that they are or were the insurgents in the first place, upheaving peaceful society as it was emerging in the market, and what a mistake that was, and 2) learning from their own such mistakes well enough to nip future insurgencies in the bud. nosce te ipsum. that'll be the day.

a story: a man with a hammer that sees only nails must have picked the hammer up somewhere. rather than ever suffer the congnitive dissonance of having to put it down, he instead engages in the delusion that is he the protector of "his nails."

It looks like James O'Keefe should have read this paper.
http://www.nola.com/politics/index.ssf/2010/01/acorn_gotcha_man_arrested_for.html

A clear case of an insurgency overreaching, IMHO