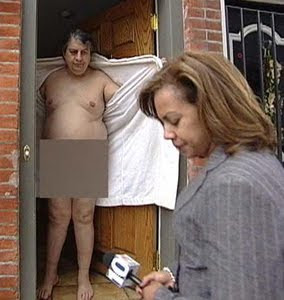 "Look! I have no dick!" Dennis Henigan demonstrates his political inability to get it up in front of God and the news media.

Go here to read the Brady Bunch's latest BS on gun control as a defense against terrorism.

Of course, any sane person understands that creating more and more complete victim disarmament zones is an encouragement to terrorism not a hindrance, but no matter, Henigan is on a roll. This time, he tries to use Rahm Emanuel's own words against him in a public open forum to embarrass the White House Chief of Staff into pushing for more gun control in the name of counter-terrorism.

All this does is demonstrate Henigan's own political erectile dysfuction. If he had any power whatsoever, he would simply pick up the phone and call the rabidly anti-firearm rights Emanuel to cajole him.

The fact that Henigan is reduced to trying to embarrass somebody who should be a bosom ally -- certainly someone who Henigan worked long and hard to put into power -- says more about his own political impotence than anything.

Now, that said, it is certain that this argument is one of timing not intent. When and if Emanuel believes that he can restrict more of our liberty, he will. Until then, Henigan's piece is the political equivalent of flashing the body politic and screaming: "Look! I have no dick!"
Posted by Dutchman6 at 7:24 AM

Makes me want to puke!!

More of the same, blame the gun and not the person garbage. Sorry, but until a gun can select, determine, then decide it wants to murder, then I will blame the dirt bag and not the inanimate object.

Maybe you answered your own question, so to speak, no sane person would volunteer to be socialist or islamic do the bradey bunch claim or seem to be sane? they are scared and dont like to be alone, we should offer them as a peace offering to someone nasty.

Looks like he just crawled up from mama's basement.
The Brady bunch are so broke and fucked up even Soros cut 'em off.