Praxis: FM 21-15 Care and Use of Individual Equipment 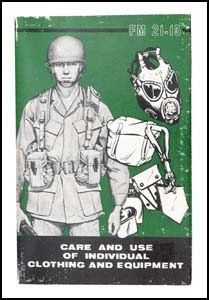 For fifteen years I have been a practioner of the art of militia logistics, helping newbies get accoutered with whatever level of combat harness and support gear they could afford. Still, once we get them outfitted we must teach them how to wear the gear. ("Lose the ALICE clips, substitute paracord, its quieter." "You're wearing the belt too far down, and move this pouch to your weak side, you won't need to get into it in a hurry.")

As we are apparently entering a period where the rapid equippage of new armed citizens for the field may be a necessity for the maintenance of social order (if nothing else), I recommend FM 21-15 Care And Use Of Individual Clothing And Equipment.

Over the years, I have collected an almost full set of the various editions of this manual, picking them up for almost nothing (sometimes as little as fifty cents) at gun shows, flea markets and surplus stores. I always buy them and then give them to the next budding militia supply man I run across. Lately, events have dictated an increase in demand so I've handed out a lot of these little books. My previous considerable supply is at present exhausted.

Now these manuals (there are only two that you need worry about, the 1977 and 1985 editions) mostly cover gear that is no longer issued. But, the fact of the matter is that this stuff is still what is in the surplus stores, it is still cheap compared to modern load bearing gear, and if you're trying to equip a bunch of people quickly and inexpensively, this gear is what you will be procuring. 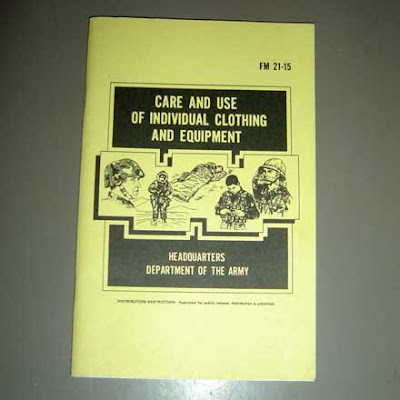 Now, as I have written before, I have always been a big fan of rifle and bandoleer. And if it is guerrilla conflict we're faced with, I still am. But as we spend our way into Weimar hyperinflation and the prospect for social chaos looms more likely than government tyranny, there will be a need for local home defense forces to maintain order, man road blocks, etc. These formations will have need for gear that not only supports those operations but marks them as MILITIA, both for the purposes of avoiding fratricide with friendly law enforcement and denoting to the casual looter that this neighborhood is organized and will be tough pickings.

For this reason alone I am still a fan of helmets -- M1 steel pots and the various kevlars -- simply because the mere wearing of the helmet and a common pattern uniform (and "uniform" could be simply OD work shirts and blue jeans, as long as everybody wears the same) connotes both SOLDIER and ORGANIZATION in the casual onlooker's mind. It is also easier to act the part if you are dressed for it.

Now, it is a given that any militia formation comes to the field with a hodgepodge of gear. A lot of current-issue stuff has leaked out of the South Asia wars and will show up on American streets in the event. So, too, will old M1910 pattern belts stuffed with Garand clips, M1956 gear loaded with M14 magazines and ALICE gear for M16 pattern weapons.

But whatever your outfit you ought to know how to wear and maintain it. The various editions of FM 21-15 can help you do that. There are also instructions for support gear with which you may be totally unfamiliar, like the packboard or the universal load carrying strap.

Unfortunately for those of us who like all our info in one convenient place, the 1985 edition was the last, as far as I know. Currently, each piece of gear (and there is a perfect explosion of various types) has its own care and use manual.

If any Threepers out there have such manuals in electronic form or know where they can be found on the 'Net, kindly drop me an e-mail.

LATER: Although this link (thanks to Chris F.), http://www.stevespages.com/page7c.htm, has many manuals, it does not have FM 21-15.

I just found a half dozen of them on Ebay.

Would you please post a (definitive) Praxis report on how to clean a weapon? I can field strip and run patches, but am I using the right cleaners? Patch size? Dry lube? Finishing lube? Wood care? The Forums of Babel are uselessly over-opinionated, so I appeal to you sir.