And he ain't even kow-towed to the PRC in November and given away our sovereignty in Copenhagen in December yet. 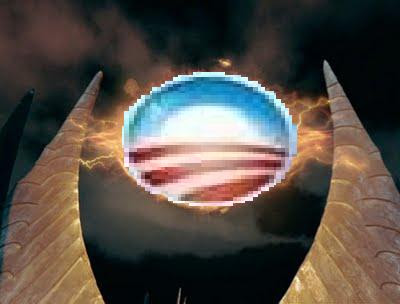 This just in from Real Clear Politics:

Barack Obama has suffered the worst quarterly decline in his public approval rating of any elected president in the post-World War II era.

Obama's average quarterly approval rating has slipped from 62 percent in the second quarter to 52.9 percent in the third quarter, according to Gallup polling. That 9 percentage point decline is twice the amount of any other post-war elected president. Dwight Eisenhower, Jimmy Carter and Ronald Reagan saw their standing decline 4 points between the two quarters. No other elected president has declined more than 4 points since 1953. The third quarter began July 20 and ended October 19.

Harry Truman, who of course inherited the presidency from FDR, dropped 13 points between his second and third quarters in 1945 and 1946.

Significantly, Obama's plunge in the polls is notable but not new news. Obama suffered the bulk of his decline in late summer, though the media was slow to notice or note. Since summer, Obama has stabilized and generally bobbed slightly above the 50 percent mark. However, Gallup's latest tracking poll shows Obama right at 50 percent. That matches the lowest ranking of his still-young presidency. Rasmussen also tracks Obama near his previous floor.

Among all presidents since WWII, Obama's third quarter approval rating is above only Bill Clinton and Gerald Ford. Clinton averaged 48 percent in the third quarter of 1993. Ford averaged 39 percent during his 1975 third quarter.

More sobering for Obama, Gallup reports that Obama's latest quarterly average ranks 144th, or in the 44th percentile, for all post-war presidents during any quarter.

And if The One and His Minions think that his popularity polls are bad now, just wait, you ain't seen nothing yet. . . .

And the hits just keep on comin'.

Which is kind of what I'm afraid of. Obama or one of his minions could over-react to something and events would take it from there.

Or, hopefully, he'll lazily let congress take the heat while he jets off to campaign dinners, and then wonder what the hell happened when he wakes up with a new, far more hostile congress.

And then, optimally it'll end with his defeat in 2012.

We are coming to the end of the proverbial "democracy" rope. We have allowed our elected officials to think of and speak of our great nation as a "Democracy" rather than the "Republic" which it is for so long that now we are victims to the neglect. Historically, democracies do not last more than two hundred years.

Obama, signing the treaty in December in Copenhagen, will be the final nail in the coffin of non-confrontational restoration of this Republic.

God bless each of you.

The polls are a lagging indicator of what we already know to be true. I'm sure there's no question crafting and/or targeting specific audiences... right?

I think their targeting of Fox news, their attempt to declare it not a news service, is indicative of the arrogance and hubris rampant throughout this administration. Add in the fact that their side expressed a real fear that Bush/Cheney would declare martial law and stop the 2008 election. You tend to suspect of others only what you are capable of yourself after all. Look for the mid terms to be nasty and 2012 to be downright ugly.
As they say denial ain't just a river in Africa, looks like it may be the nickname for the Potomac as well.

Your flag is made in China! What gives! I saw one in Chicago and when the owner saw the "Made-in-China" label he was pissed! I expect he'll be writing you a "happy-gram" shortly.