Another anecdote from an unraveling civilization: Wanton slaughter of an innocent potato. 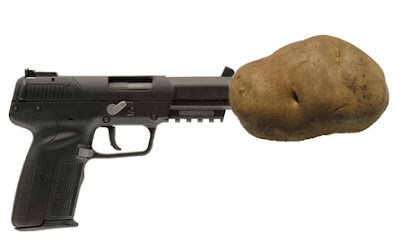 By From The Birmingham News

FORESTDALE, Ala. -- A Forestdale woman arrived home from work Wednesday evening to find her dog slain and her home burglarized, authorities said today.

The burglar apparently knew the 8-year-old pit bull was inside the Heflin Avenue West home and came prepared.

He used a potato as a silencer, placing it over the barrel of his gun as a silencer when he shot through the front door, striking the dog, said Jefferson County sheriff's spokesman Lt. Randy Christian.

The thief then kicked in the back door, shot the dog two more times and stole a computer and monitor valued at about $1,500, Christian said.

Investigators have not yet identified any suspects.

"First of all you have to ask what kind of person kicks someone's door in to steal from them," he said. "But to take the life of a pet that someone has loved for eight years is despicable and on top of that it is very likely someone that knew the victim. That's pretty sad. I have to believe there is a special place for those people, in fact I am counting on it."

Not to mention the wanton slaughter of an innocent potato, cut down in the prime of life, never to spud or even contribute French fries to society. Just splattered all over some old lady's door. "The horror. . . The horror." 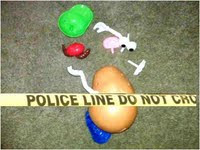 I heard about this on the news. You know that our dogs are all 'family', and I would as soon terminate any threat to them as I would a threat to myself.
If they find the gutless bastard who did this, I can only hope that they find just cause to kill him on the spot.
j

That shiftless bastard. All Spuds must revolt! LOL

Well, I think it's worse than that, anon. If you have potatoes in your house, you now have "silencer parts". ATF can now bust virtually anyone who buys potatoes, and you know Mike's comment about "fair trials in federal courts", huh?

So many emotions, so little time.

I sure hate for anyone to get robbed-especially for shooting the dog.

I would say it's just another common criminal, but common criminals rarely show this much foresight and creativity. And if the perp is a right handed shooter, would that make this a left handed 'tater?

I presume that if this wasn't the fed, the perp can be charged with violations of NFA for unlicensed possession/use of a Class III AOW-silencer.

Liberals everywhere will have to jump on this as evidence that the NRA is stirring up a frenzy of potato buying out there. The NRA will respond that the man bought the potato illegally through a straw man purchase and used it illegally as well. We need to enforce the laws already on the books! The Million Moron March will howl in protest that we need tougher new laws.

The BATFE will have to add another initial to their ever extending list of Stuff We Regulate so that they can cover various fruits and vegetables that might be considered weapons.

On the praxis side, I suppose a dense vegetable like this could be a nice silencer. The gases would spend themselves on the potato, thus producing a hot potato. Is there a minimum tater size that must be used to silence a weapon? Do you pre-drill the hole for the bullet? How many rounds is one tater good for? More importantly how many rounds does it take to fully bake the silencer for later consumption?

So does this mean when I go to buy a bag of patatoes I'll have to fill out a Form 1 and get a tax stamp?

That's why JBT's kill our dogs immediately; they know our dogs are our family. It is a cheap way for them to get away with killing our children.

Agreed - hurt my dog, you might as well have hurt my kid.

That said, I always thought the potato-thing was a bit of a joke. Never tried it because I didn't want to risk a kaboom.

For scientific curiosity purposes only - does that really work?

Would one bore out the potato or just shoot "through" it?

This is foolishness and is not important to our cause.

Just an fyi, this may work after a fashion with a pistol but for God's sake do not try it with a rifle or shotgun. Unless or course you really want to see your firearm do an impression of a peeled banana.

Doing a quick search on "potato silencer" yielded a number of hits which predominantly lean towards this being an urban legend. I looked up one youtube video of some Real Men Of Genius trying this concept out.

So if the potato silencer is a hoax, then how can the story from Forestdale be true?

Eric
They call me Tater Salad