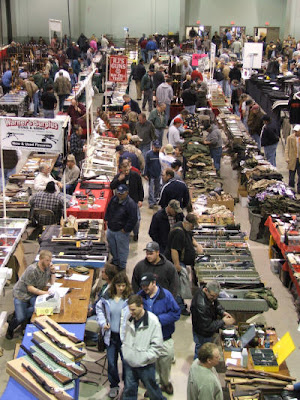 I arrived at the Tallahassee fair-rounds at 10:30am. The doors had opened at 9am, and the parking lot was literally overflowing. Cars and trucks were parked on the grass ball field walkways well outside of the designated parking areas. I've never seen such a large crowd at a Tallahassee gun show.

The show now takes up two of the full sized buildings. I did not get a table count, but it was impressive.

Action was fast and furious, and I saw lots of face to face private sales being brokered outside the buildings. (Face to face paperless sales are still 100% legal in Florida. Sorry, Sara Brady.)

The good news: There was ammo, and lots of it. A major Georgia based vendor was doing a brisk business with his own brand new factory ammo either in mint ammo cans of heavy weight plastic bags. The crowd around the table was impressive. Prices were fair. Plenty of 7.62 Nato, 5.56 Nato, .40, .45, .30 carbine, .357 mag., 9mm, and .38 special on hand, and selling like proverbial hotcakes.
More good news, there were two vendors with well stocked tables of reloading supplies. Primers, bullets, brass, and powder all appeared to be well stocked.

Pretty much any long gun or hand gun you might want new was available. There was an amazingly WIDE variation of prices on rifles. I often saw 100 dollar differences on the same piece on opposite sides of the show hall. On one side of the show 50 rounds of .45acp was 18.50, while it might be 30.00 in the next building. It pays to walk around a bit !

Some quick all "over the place" product prices;

As I walked out, I noticed one lone woman protesting the show. She was walking the sidewalk outside of the fairground parking lot with a sign that read: "Guns Kill - Just what Tallahassee Needs, More Guns"

I smiled, knowing that Tallahasse was getting more guns. And more ammo, as well.
Posted by Dutchman6 at 11:35 PM

I forgot to mention...the line at the Tallahassee show for people who had signed up to take the first scheduled Florida concealed weapons carry permit course for that day was huge. It literally snaked all the way out of the doorway from the second building.
There was also quite an interesting mixture of college students, housewives, husbands with teen kids, and elderly folk, all standing in CCL class line. Bravo.

Sorry, typeay, all I see in that is a lot of people patiently waiting for their slave chains.

Training for self defense is valuable. Begging permission from government to use it is pitiful.

Mama Liberty, you're certainly welcome to your opinion, and I constitutionally understand where you're coming from. Do I like the CCL requirement concept in my state? Heck, no. Florida doesn't have open carry law, either. Let's work on getting it changed / eliminated. As for me, and as for NOW, I see every person in my home state that legally carries concealed as a probable ally.

I figure it's a small step towards the point when they will awaken to the truth. Not everyone is willing to transform from a slave into an active rebel all at one go.