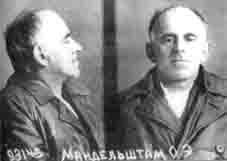 Written by Osip Mandelstam in 1933, and read to a small circle of friends, one of whom was an NKVD informer, it was inspired by his personal witness of the great famine.

Our lives no longer feel ground under them.
At ten paces you can't hear our words.
But whenever there's a snatch of talk
it turns to the Kremlin mountaineer,
the ten thick worms his fingers,
his words like measures of weight,
the huge laughing cockroaches on his top lip,
the glitter of his boot-rims.
Ringed with a scum of chicken-necked bosses
he toys with the tributes of half-men.
One whistles, another meows, a third snivels.
He pokes out his finger and he alone goes boom.
He forges decrees in a line like horseshoes,
one for the groin, one the forehead, temple, eye.
He rolls the executions on his tongue like berries.
He wishes he could hug them like big friends from home.

The epigram reached Stalin, who declared it counter-revolutionary.

Instead of executing Mandelstam immediately, Stalin decided to torture him, first by forcing him into exile and then sending him to work in the Gulag. During these years Mandelstam became depressed and tried to commit suicide several times. Eventually he started writing pro-Stalin poetry in attempts to save the lives of himself and his wife. He died in 1938, apparently due to an illness, although it is just as likely he was murdered. Not that it made any difference.

He wrote his own epitaph, I think, when he said:

"Only in Russia is poetry respected – it gets people killed. Is there anywhere else where poetry is so common a motive for murder?"

Yes, there were, and are today, many places where such things happen. It is the mark of the advanced collectivist state and respects no nationality.
Posted by Dutchman6 at 7:38 AM

Wow, so very true- you know with my collection of literature and "revolutionary" materials (Our American Revolution in the late 1700's of course) I will be one of those executed! ;)

I tried to read "Hope against Hope" a few years ago. It was so dark that I abandoned it halfway through.

Ever heard the Al Stewart song 'Joe the Georgian'? Sounds like this mans history is part of it.