"They're gonna need a bigger jail." Yeah, and a whole crap-ton of deputies. 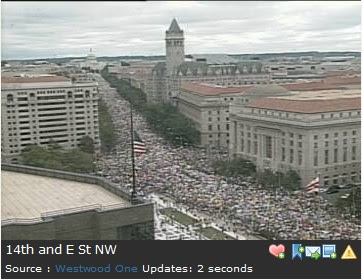 Carrie Budoff Brown has been tracking this story at Politico.com.

Americans who fail to pay the penalty for not buying insurance would face legal action from the Internal Revenue Service, according to the Joint Committee on Taxation.

The remarks Thursday from the committee's chief of staff, Thomas Barthold, seems to further weaken President Barack Obama's contention last week that the individual mandate penalty, which could go as high as $1,900, is not a tax increase.

Under questioning from Sen. John Ensign (R-Nev.), Barthold said the IRS would "take you to court and undertake normal collection proceedings."

Ensign pursued the line of questioning because he said a lot of Americans don't believe the Constitution allows the government to mandate the purchase of insurance.

Ensign's argument, however, wasn't persuasive to the committee -- which rejected an amendment from Sen. Jim Bunning (R-Ky.) to eliminate the individual mandate.

Sen. Olympia Snowe (R-Maine) was the only Republican to vote with Democrats to preserve the mandate.

Ensign pressed for an explanation of what would happen to someone who didn't knuckle under to the mandate. This is what he received in reply.

Sen. John Ensign (R-Nev.) received a handwritten note Thursday from Joint Committee on Taxation Chief of Staff Tom Barthold confirming the penalty for failing to pay the up to $1,900 fee for not buying health insurance.

Violators could be charged with a misdemeanor and could face up to a year in jail or a $25,000 penalty, Barthold wrote on JCT letterhead. He signed it "Sincerely, Thomas A. Barthold."

The note was a follow-up to Ensign's questioning at the markup.

To which "jd" commented at Politico:

"They're gonna need a bigger jail."

Yeah, and a whole crap-ton of deputies.
Posted by Dutchman6 at 7:07 AM

Recall that a crime that leads to a potential year in jail results in the loss of your 2nd amendment rights.

Some poor guy who can't afford to buy an approved policy is going to prison anyway, and is going to be fined into bankruptcy, may just decide to make it worth his while.

When I look at something like this this, I have to think that not only is it the honorable thing to do, but being an Oath Keeper is the PRAGMATIC thing for cops to do.

good luck, I say to em. They aint takin me to jail.

Son of a Renegade

Fine, jail, or summary execution for 'resisting arrest or failure to follow instructions' of the puke sent to bring you in. Cleaning & oiling...

There's that pesky 8th Amendment to the Constitution as well, something about "nor shall excessive fines be levied or cruel and unusual punishment be imposed."

Wonder how Sonya Sotomayor is going to convolute the language on this one?

NOTHING leads to the loss of my 2A rights since they aren't vested in a piece of paper!

The only thing that discontinues my gun rights ... is my death.

I foresee some watering of the liberty tree in our future.

You forgot -
They're gonna need a hell of a lot of body bags for their gestapo.
- j -

If this passes, with that intact, I will consider it an open declaration of war on the American people by a corrupt and tyrannical government. There is my line in the sand, right there.

I agree with Anons: This is an open declaration of war against the American people.

This legislation is basically saying to the faces of the citizenry: "You are not worthy to be considered human beings. You have no rights. You are nothing but resources, that we, the government can manipulate and use any way we want. You will not have a choice. You belong to us. You are the fuel for our machine, and we will make sure you don't jam up our system".

Isn't that what King George III basically said to the colonists when he began to mercilessly tread upon our rights?

Our March made this affair look like an impromptu gathering.

Not only a lot more jails. I would venture to guess they will need to stock up on body bags as well.

I think this quote from First Blood, changed a bit fits this mess;

Obama: Are you telling me that 200 of our yes men against your Dogtown boys is a no-win situation for us?
Mike: You send that many, don't forget one thing.
Obama: What?
Mike: A good supply of federally approved body bags.

Why would they put these people in jail? Better to let their nerves work on them for a year or two, then give them a half-amnesty that leaves them out of jail, but with the tax debt, no-fly, loss of passport, credit score, felony, gun rights, etc. As much as they can pile on without people concluding they are better off fighting the system.