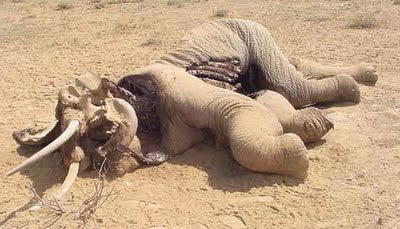 Elephant rotting in the sun. What shall we do about about the GOP?

To answer your e-mails collectively, I would first like to say that reports of my death have been greatly exaggerated. (Poor ATF.)

Second, I have had several intruding events take me away from the blog, and this will continue for the near future, until (and I have reluctantly concluded this) I must put Sipsey Street into suspended animation in order to finish Absolved.

There are several pieces I am working on now, not the least of which is my second letter to Holder. When that is done and posted, I will suspend day-to-day blogging until Absolved is a completed manuscript.

That said, here is something you should read today, and think about -- hard. If we dodge the many bullets already in flight (unlikely but possible) how do we achieve the aim of restoring the Constitutional Republic politically?

Is that even possible, without the sanguinary effect of civil war?

Returning the federal portion of the Republic to its constitutional underpinnings and boundaries will not occur in the absence of a civil war. Lets face it, there is a political stalemate occuring where neither side (GOP/DEM, Conservative/Libtard/Libertarian) has a majority. This makes "electing" politicians that will make the changes we want a dead-end tactic.

Short of having a congressional tea-party where patriots raid the Capitol and throw the majority of the politicos in DC in the Potomac with cement around their feet; I see little change for the better in our future.

The question is - after patriots do away with the current political traitors on Capitol Hill, what is a patriot to do about the electorate that keeps putting those people there without violating our first principles?

Repealing the 16th (or is it the 21st) Amendment that allows for popular election of Senators is a start because the original system of electing Senators (via state legislators) was designed to give the states a voice in WDC. The "popular vote amendment," as I will call it, trampled states' rights and corrupted our federalist system. Restoring that balance of power is the foundational step in restoring the Republic.

The republican landslide of '94 was a popular reaction to Hillary care and the other liberal tendencies of the early Clinton administration. The people wanted real change and that is what the Republicans promised in their contract with America. So we gave them their chance and they screwed the pooch to the point that Obama and the dems took over due to a lack of anything better being offered. Of course now the people are gagging on what the dems are feeding us, but it still begs the question, what in the hell other choice do we have? Vote the bastards out and replace them with what exactly? More of the same lies and broken promises? Not that hard to understand how some are ready to just start shooting and get it all over with. I'm not myself, but what are our choices really?
And Mike, needs must, do what you have to, but get that book out soonest. Thinking it would make a great Christmas gift for several folks near and dear to me.

Other then that minor bobble, the rest is a good idea. My question is, how do we, the people repeal the 17th Amendment? The Powers-That-Be in W.D-C aren't going to do anything about it. It would be cutting their own throat.

If you have control of one house of congress (or even just enough votes in agreement) you can prevent any legislation from passing. If the President is on your side, you only need enough juice -- 1/3 +1 of one house -- to prevent a veto-override.

The most important legislation to prevent passing is (wait for it...) the budget resolution. No budget resolution, no budget, no authority for the IRS to collect anything, no paychecks for federal employees or legislators or soldiers. Like John Galt, you stop the engine of Washington DC.

Now, the real problem is that the electoral system is so rigged that, absent a revolutionary mindset among a substantial wedge of the populace, you can kiss that fantasy good-bye. Ron Paul was the last gasp. The MSM managed to torpedo him with ruthless efficiency. If anything argues for a shooting war, that's it. We have crested the hill of this roller-coaster; it's all downhill from here.

I'll miss your blogging.
But, I look foward to reading your book.

Mike look to you and your family's health and safety first.

Posting to let us know what is going as needed.

And finally because it is a funny way to end my post. And all I have time to do.

Look after yourself and enjoy the writing (it's almost as good and lasts much longer than sex!)