Democrats call down "rain of hellfire" on opponents. (?) 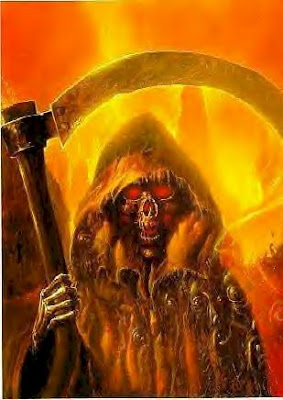 I found this story on Politico.com to be a little puzzling at first. Read it, and I'll comment on the other side.

The increasingly aggressive Democratic National Committee on Friday launched a new “Call ’Em Out” website targeting prominent Republicans for statements they have made about President Barack Obama’s health reform plans.
“Help debunk the outrageous lies and misinformation about health reform,” the site says.

DNC spokesman Hari Sevugan said: “The message to opponents of change who would lie or misrepresent the truth should be clear. We are going to respond forcefully and consistently with the facts, and you will no longer be able to peddle your lies with impunity. Through tools like 'Call 'Em Out,' you will be met with a rain of hellfire from supporters armed with the facts and you will be held to account.”

The website is part of a larger, more aggressive approach taken by the White House through the DNC to push back against smears, distortions and misinformation. It’s taken various forms, including hitting back on Republican Medicare attacks with a TV ad that ran nationally and in 10 targeted members’ districts.

“Every Republican that goes on TV or gets on a conference call or steps up to a mic is getting fact-checked,” a Democratic official said.

The new site’s opening target is Minnesota Gov. Tim Pawlenty. A button urges visitors to “CALL PAWLENTY,” then gives his office number at the Minnesota Capitol.

One of the tools is a Twitter button that can automatically tweet: “Hey @timpawlenty, quit lying about health reform. … #CallEmOut.”

“Minnesota Governor Tim Pawlenty recently claimed that health reform will lead to death panels — a claim so thoroughly debunked that [‘Morning Joe’ host] Joe Scarborough called him on his lies,” the site says. “And Pawlenty's extreme behavior didn't stop there. Watch the video, then take action to call him out.”

Alex Conant, a Pawlenty adviser, replied: "Seriously, why is the DNC's attack squad so obsessed with T-Paw recently? The DNC's attacks are a transparent attempt to avoid a serious discussion with Governor Pawlenty and other Republicans over how to fix health care. Rather than blindly trying to undermine Pawlenty, national Democrats could learn something from his record of balancing budgets and reforming health care without raising taxes." 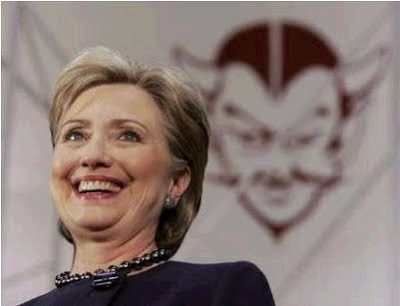 Hillary yuks it up with Old Scratch.

"Rain of hellfire"? How could that be? I wondered. I thought these heatherns didn't believe in the retribution of Hell, what with their support of the murder of millions of innocents every year. But then I remembered, even the Devil believes in God, and in Hell.

So in calling down a "rain of hellfire," Democrats are invoking THEIR deity -- Old Scratch hisself.

Looked at it that way, it makes all the sense in the world.

It is actually a bit funny when you think about it. These limp dick toads are going to 'rain down hellfire' on us? Let's "git 'er done".

'Bottom feeder excrement' is the most polite noun that I can find for these folk.

Hard to tell who's uglier, Hill or haSatan....

Kinda funny in a way, these idiots are attacking the very people who are experts at raining down hellfire on our enemies.

Interesting choice of words for more than one reason...Don't Predator drones rain "hellfire?"

The most amusing thing is to hear this bunch claim to be planning to attack with "facts" and "truth".

Democrats "call down rain of hellfire" on opponents.
Oh I am so scared.

"Lest we forget at least an over-the-shoulder acknowledgement to the very
first radical; from all our legends, mythology, and history (and who is to
know where mythology leaves off and history begins - or which is which), the
first radical know to man who rebelled against the establishment and did it
so effectively that he at least won his own kingdom - Lucifer."

From the opening pages of 'Rules for Radicals' by Saul Alinsky