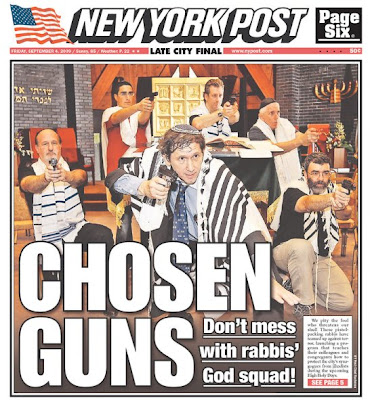 Thanks to thedweeze for forwarding this priceless gem. 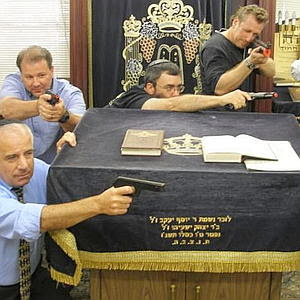 Go ahead, make my high holiday

It's high noon for the high holidays.

Fearing jihadists will attack synagogues during Rosh Hashanah and Yom Kippur, a group of badass rabbis has developed a program to turn your average shul-goer into a lean, mean fighting machine.

The group, which calls itself the International Security Coalition of Clergy, was founded by Rabbi Gary Moscowitz, who boasts a black belt in karate, teaches martial arts and was an NYPD cop for nine years.

He's teaching others basic and advanced fighting moves -- how to take down a terrorist by the neck, how to use a table as cover from gunfire and how to execute a nifty running somersault while drawing a gun -- that he says can be used by Jews if they're attacked by terrorists during prayer.

"Jews are not like Christians," Moscowitz said. "If I turn my cheek, I'm coming around to make a kick."

Moscowitz said he doesn't think Muslims in general are a threat, but "extremist groups are."

"We're just worried about the safety of the houses of worship that are being threatened with rhetoric on regular basis and extremism," the 52-year- old rabbi said.

Moscowitz said few people took him seriously until May, when the FBI busted homegrown Muslim terrorists for allegedly plotting to blow up synagogues in The Bronx.

Since then, he said, his phone has been ringing off the hook and he created a 100-hour course for synagogue self-defense.

"A terrorist could put a yarmulke on, say, 'Happy holidays,' and blow the place up," he said.

NYPD spokesman Paul Browne said the rabbi had been fired in the early 1990s from the force, but didn't know details. Asked about Moscowitz's criticism of the NYPD, Browne opted for a biblical-like statement.

"Blessed are the tight of lip," he said, "for they shall resist speaking ill of the ill-informed."

This would be a safe place.

Is that a Tokarev TT33 the guy at the front is holding ? Kind of looks like one, but the photo is rather low-resolution.

If he is, hey, nice pistol there, Rabbi. I love my Polish Tok. Very under-rated handguns, in my opinion.

Now that is a good idea!

Is this New York City? If so, how is it that they have handguns? Are not all guns banned for unimportant people?

Hmm... looking at that photo again, I notice what appears to be red/orange muzzles on those weapons. Wazzup wid dat?

Rusty - my thought is that they may have used Airsoft or other replicas for the public photo to avoid persecution form the local Gestapo.
But I have no doubt they will also have the real deal close at hand for real-world applications.

You don't want them to be pointing real firearms at people and cameras during this photo-op do you?

The guy on the bottom left has his finger in the trigger guard and there is no orange band on the muzzle. I hope someone teaches him proper firearms handling.

I was actually questioned about being armed in the 'temple' and I said I can go with my guns,but not stay without them.All was forgotten,and I go armed.I am retired LEO [ 25+ years ] and when I go to temple it is for the high holy days = ergo ARMED.I believe that Rabbi understands the true meaning of "Never Again".