It's okay for the GOP leadership to go swimming in Lake Lou Yaeger -- the fish only eat testicles. 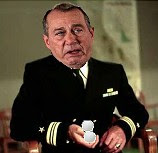 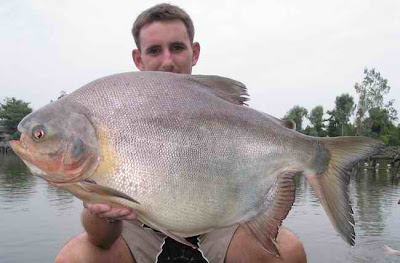 Residents of Papua New Guinea may beg to differ. There, according to British fisherman Jeremy Wade, the pacu is known as the "ball cutter." In 2011, Wade said locals informed him that two fisherman had died from blood loss after something in the water had bitten off their testicles, according to the Metro.

"The locals told me that this thing was like a human in the water, biting at the testicles of fishermen," Wade said.

Wade determined that the perpetrator was the pacu, which is known for having human-like teeth. 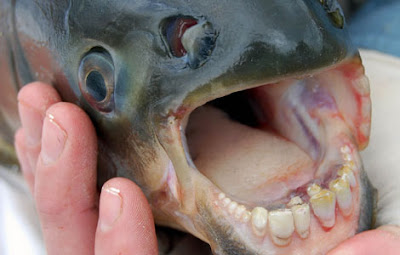 Very funny. Especially the photo of Boehner as Bogie.

It is time to take all the child molesters for a swim in Illinois!

Typical we cannot control any border from Einmarsch!

Anonymous @ 12:13 PM said "It is time to take all the child molesters for a swim in Illinois!"

Actually, you could take 'em just about anywhere. According to the Wikipedia article on Pacu, discoveries in the United States have been reported in Alabama (no skinny dippin' for the Dutchman ;-) ), Arizona, Arkansas, California, Colorado, Georgia, Idaho, Illinois, Indiana, Kentucky , Maine, Maryland, Massachusetts, Michigan, Minnesota, Missouri, Missouri, Nebraska, New Hampshire, New York, North Carolina, North Dakota, Ohio (or David either it would appear), Oklahoma, Pennsylvania, South Carolina, Texas, Utah, Wisconsin, and Wyoming. Apparently people buy the things in pet stores and when they get too big, they just dump 'em in a nearby body of water instead of disposing of them properly or donating them to a public aquarium.

BTW, I couldn't believe that photo of their teeth so I looked it up. The things really do have human-looking teeth. Supposedly they'll eat nearly anything. They also supposedly make good eating. Who knew?

Just when you thought that things here in Illinois couldn"t get any worse.

Am I the only one who finds it odd that the men seem to enjoy swimming or fishing in a naked, balls-out manner? Is anyone else surprised that a snake or a large fish did not also mistake their penises for some type of edible aquatic life form?