Collectivist "media watchdogs" complain about Issa "witch hunt." My expertise in the matter of wicked witches & the difference between naked & nekkid 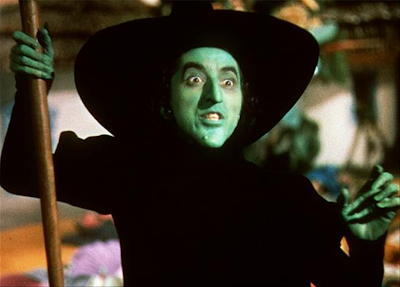 Now, look. I have had more than a passing acquaintance with wicked witches in my life. I was married once before. I saw the movie about her great aunt, The Wicked Witch of the West. I've even run into some off screen.

Once, right after I started in the brokerage office at the truck line CRST, I overheard a conversation between two female co-workers about the upcoming solstice, running nekkid through the woods, and other eagerly anticipated bizarreness.

Anyway, finally I asked, "What the hell are you two talking about?"

Came the reply from the older one, delivered rather malevolently: "We're wiccan witches. Does that BOTHER you?" (She drew out the word "bother" with special emphasis.)

"Heck no," I answered with a grin, "My God's bigger than yours."

Anyway, so I have some experience when it comes to wicked witches and thus, by extension, a more than average understanding of what a "witch hunt" really is.

As an expert on the subject of wicked witches I can tell you that this is an absolute slander of both FOX's Chris Wallace and Congressman Issa. There IS a wicked witch in the Gunwalker Scandal, but neither of those august gentlemen has had the cojones to go after her as yet.

I refer, of course, to the Secretary of State of the United States of America and, to my knowledge, only one person in the nation so far has had the temerity to identify her and her links to the Gunwalker Scandal, and that is yours truly here in these pages.

So, I urge this hollow-headed collectivist twit to get off their backs. No, if you want to accuse somebody of a real witch hunt, that somebody would be, well, me.

However, I hasten to note that there IS a real wicked witch in this hunt.

And I know something about wicked witches. 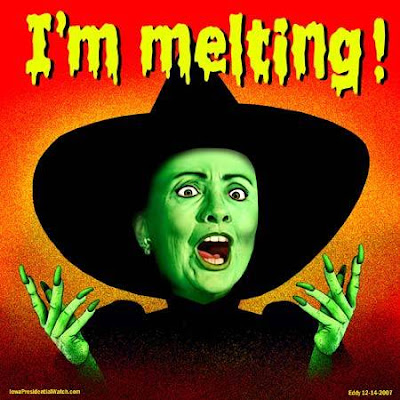 The Secretary of State reacts to the latest Sipsey Street series, "'In at the beginning.' The State Department and the Gunwalker Scandal."
Posted by Dutchman6 at 5:39 AM

"So, I urge this hollow-headed collectivist twit to get off their backs. "

Nah. . not them. If they did, they'd lose out on all that money from prostitution.

And you're partially correct. The other witch is Holder (classically, witches could be female or male).
Could you call Holder a son-of-a-witch?

And what about Janet, is she just the witch's apprentice? A kind of Igor in drag?

wv: "ousta", coming soon to a capitol near you!

When this story first broke I said Hillary and Rahm were involved, hence the departure of the white house aide. This story has just begin to develope. The democratic party, as it now functions, will be severely damaged.

Did your ex's great aunt live in Texas? She looks just like my neighbor when I was growing up. Personalities were a close match, too.

Holy rolling witch, she was, but Joan Rivers would have spelled it with a capital "B." May God have mercy on us all.

I guess they feel arming drug cartels, who are working with terrorists planning to attack America isn't serious? May they be the victims if any of these plots succeed. They seem to think they're magically protected. What's wrong with these nuts?

This makes Fast and Furious look more harmful to America. How many of those weapons are now in the hands of terrorists? Will they be invading the country, with those weapons, killing more border agents along the way? OBAMA NEEDS TO BE CHARGED WITH TREASON. THE BASTARD IS THE ENEMY!

As a Wiccan, I'm grateful for your clarification of "naked" and "nekkid."

There are NO terrorists! Just another figment of the CIA/FBI/DHS/... imagination.
Stop playing into their political/war/mind games.

Who shall we fight tomorrow, EastAsia or EurAsia?

Of course, "Law Enforcement" makes sure to protect their own as well. The only ones well and truly screwed by this damnable swill are the Mere Citizens. The stench is overwhelming.