Early investigator of the true circumstances of the Terry murder dies of pneumonia. 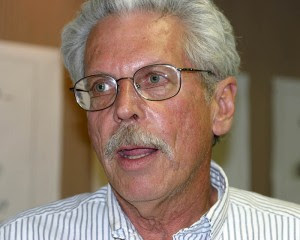 Long time readers will recall the valiant work that Tuscon Citizen columnist Hugh Holub did early on to try to discover what really happened in Peck Canyon the night Brian Terry was killed.

I have just learned in an email from his widow Nancy Valentine Holub that Hugh passed away last month.

I cannot tell you what a shock this is to learn of his passing and what a loss it is to country.

Vaya con Dios, Hugh. You will be missed.

This is the last email exchange I had with Hugh. He was a great guy. A brilliant guy.

That's the last I heard from him. I got busy and sometime in between, he died. I am ashamed to admit that. It still is a great idea, but somebody else is going to have to make it happen now.

I just had a stroke of GENIUS!

In order to believe Operation Gunwalker was "a failed attempt to catch the 'big fish' of the drug cartels,"

One must believe that the way to catch "big fish" in real-life is to throw your bait in the water as you're driving over a bridge!

Leave all the poles at home! Don't need any line, or hooks, bobbers etc - just drive over the bridge and throw the bait into the water!

Hugh was a good man, he was an 'Az Liberal' with a healthy dose of cowboy, He really started to come to realise the level of corruption on the left in this last year and he had all but abandoned his 'soft' gun control stance.

He was a wealth of information on many facets if Az history and a truly honorable man.

Would anybody be surprised if this good man was given a little hotshot in the hospital?

I'm becoming convinced that there are no political solutions left. The government/media complex controls all now.

All that's left is the hot civil war.

Should Hugh have died of pneumonia?
Was he sick? In bad health?