"We in the FBI do have unfinished business." Yeah, like the Terry Murder Cover-up. This guy breaks me up. I might start crying for his sorry ass. 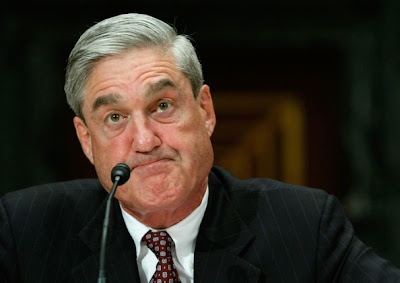 "I get all teary-eyed . . . if I start to think what will happen to my sorry ass if the Terry murder cover-up breaks down."

This same time last year, FBI Director Robert S. Mueller III was feeling a little nostalgic when he spoke in Orlando before the International Association of Chiefs of Police Conference. It was like a final victory lap, the last speech as director before the group.

But in a move that caught almost everyone by surprise, the White House earlier this year asked him to stay on two more years beyond his 10-year term. After some consultation, Mueller, now 67, obliged and Congress confirmed his stay. . . "We in the FBI do have unfinished business."

Oh, Godfrey Daniel! I might start tearing up for this murderous schmuck any minute myself.
Posted by Dutchman6 at 5:52 PM

Herr Mueller's tears are not for his victims.

"Compassion is founded on love for someone: love renders the other party as it were, another “self,” one with you. Sentimentality is grounded in self-love: it makes one sad not as the result of the suffering of the other person, but rather from one’s own ruined mood; instead of striving to put an end to suffering in the world, it strives to put the images of suffering out of one’s field of vision."

"A sentimental person is ready to weep at the sight of a sick dog and at the same time remains deaf and indifferent to the suffering of millions of people, just as long as he does not have to see their suffering. Sentimentality is not love, but rather, morbid impressionability, chronic, suppressed hysterics taking the place of love."

Google "cruelty and sentimentality" for a detailed scholarly article on this phenomenon.