Bingo. John Solomon reports high-level DOJ memo in October 2009 as the initiation of Gunwalker. "Get Shorty." 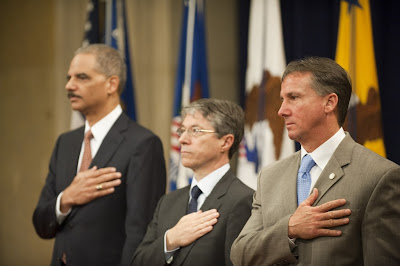 John Solomon reports on the Daily Beast in an article entitled "Gun-Running Sting Blows Up: House Hearings on ATF's Fast and Furious" that today's hearing will include the revelation of a blockbuster memo from October 2009.

For months, a mystery has engulfed the U.S. southern border and Mexico—what suddenly caused federal agents to abandon years of practice and knowingly let suspected straw buyers for Mexican drug gangs walk off with semiautomatic weapons from American gun shops?

The answer leads to previously undisclosed instructions given by higher-ups inside the Obama Justice Department, which originally denied any role in the burgeoning controversy, The Daily Beast has learned. . .

To date, blame has rested mostly with the Bureau of Alcohol, Tobacco, Firearms, and Explosives supervisors who approved the strategy in Arizona and Washington. . . . But on Wednesday, The Daily Beast has learned, congressional investigators will disclose that just weeks before ATF supervisors approved the Fast and Furious operation and its controversial tactics, senior Justice Department officials sent a memo to prosecutors and agents on the front lines of the border wars urging that they go beyond their traditional tactics of interdicting guns being purchased by straw buyers and try to make cases against the drug gangs themselves.

"Given the national scope of this issue, merely seizing firearms through interdiction will not stop firearms trafficking to Mexico. We must identify, investigate, and eliminate the sources of illegally trafficked firearms and the networks that transport them," the office of then Deputy Attorney General David Ogden wrote in an October 2009 memo marked law-enforcement sensitive.

The memo was prepared in connection with a previously unknown high-level Justice Department meeting in which representatives of key law-enforcement agencies on the front lines of the border wars were summoned to discuss a new approach to combating border violence, according to government officials familiar with the document.

Within days, the memo from Ogden's office was being distributed inside the ATF office in Phoenix, where supervisors quickly launched Operation Fast and Furious.

Government officials confirmed the memo's contents and the discussions about broadening the border strategy beyond interdiction but insisted the memo provided no specific guidance authorizing the specific tactics of letting the guns "walk." Attorney General Eric Holder has said he did not know about those tactics at the time and has asked the department's internal watchdog, the inspector general, to investigate what happened.

The memo, however, provides important new information and context to the events that have led to a growing controversy in Congress, where Republicans led by Sen. Charles Grassley of Iowa and House Oversight and Government Reform Chairman Darrell Issa have collected extensive evidence that ATF agents vehemently objected to letting the guns walk but were overruled by supervisors, who let hundreds of a weapons a month flow to straw buyers even as violence escalated inside Mexico in 2010.

I have mentioned Ogden, the number Two man at DOJ, before back in April here, quoting Wikipedia:

According to news accounts, Ogden stepped down in part because of disagreements with Attorney General Eric Holder over management issues.

As I reported then, "The first speech he gave after his resignation was on the subject of 'Restoring the Department of Justice.'"

It would seem that "Shorty" Ogden has some first-hand knowledge of what needs to be restored. Phase Three of these hearings is going to be fascinating. Where did Odgen get HIS bright idea?
Posted by Dutchman6 at 5:51 AM

Mike - if I remember correctly a year or so ago there was a move to grant (more or less) diplomatic immunity to INTERPOL agents as well as give them some of the extended powers just granted to the 'feebs'. Anyone else recall this and have any further info?
Perhaps the gunwalker issue had some international (ie UN?) complicity?
Makes ya wonder at the very least.