"I think you're going to need a bigger bus." 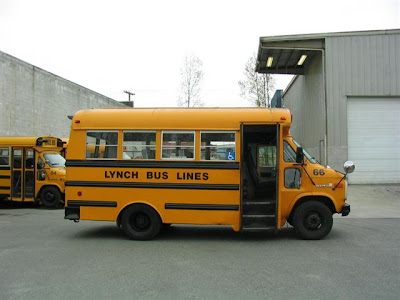 Joy McCann has the best line of the week regarding the Gunwalker Scandal.

The unresolved questions at this stage seem to be less about how this was screwed up so badly, but rather who authorized this debacle and how high up the food chain it goes. As Ed Morrissey already noted, it looks like the president will be tossing [the] acting head of the ATF, Kenneth Melson under the bus. But given the scope of this scandal, the horrific damage which resulted (including the loss of American agents’ lives) and the sheer stupidity of the plan, well…

I think you’re going to need a bigger bus.

Oh my goodness, this whole expose is just so much fun! Is it over when all the wrongdoers resign? Or will there be CONgresscritters with the intestinal fortitude to see justice carried out to the full extent of the law?

In that spirit, Just before the piranhas bite, here's to Melson and critters singing:

There just isn't any bus ever built big enough for all the tossing barry has done - maybe they can use that fleet of school buses from down in Nawlins?

It will be 'telling' if melson is allowed to resign/retire with pension/benefits AND particularly telling where he ends up getting hired afterward. Anybody else remeber where the 'investigating officer' at Chappaquidick ended up after retiring from the Mass. SP?

But if you DO get a bigger bus, can you still call it the "short bus"?

I just need to note that an html error in that article didn't make it clear when I was talking, versus when I was quoting Jazz Shaw.

The error has been corrected, but that great zinger is actually Jazz's, from this article: