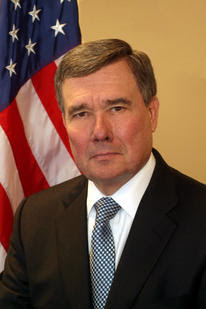 Gil Kerlikowske, no longer a happy Obamanoid, now just another running "Gunwalker Man," bugging out of DC ahead of the hearings.

There is nothing to indicate that his current effort to become Chicago’s police superintendent, and thus depart his post with the Obama administration, may have been prompted by either Grassley’s or Issa’s Gunrunner probes.

Workman is quite right about Kerlikowske wanting to escape Washington ahead of the Gunwalker Scandal hearings:

US drug czar wants to be top Chicago cop.

WASHINGTON (AP) — The White House drug czar says he wants to be Chicago's next top cop.

Gil Kerlikowske, head of the White House Office of National Drug Control Policy, said Wednesday he applied for the job and "wouldn't have applied for it if I didn't want it."

Several television stations had previously reported that Kerlikowske interviewed for the Chicago police superintendent's job with both mayor-elect Rahm Emanuel and the police board in the last week.

Kerlikowske, who spoke to The Associated Press during an interview for C-SPAN's "Newsmakers," is a career law enforcement officer who was police chief in Seattle before taking the White House job.

Emanuel said throughout his campaign that he wouldn't renew Weis' contract for reasons including low officer morale.

A nine-member police board is searching for a successor to Weis and will offer up three candidates to Emanuel, who takes office in May. Terry Hillard, who ran the Police Department from 1998 to 2003, took over the superintendent job on an interim basis.

Earlier this month, the Chicago Police Board reported more than 40 people applied for the superintendent's position. That list includes many current members of the department and current or former leaders of large organizations.

I'm sure Kerlikowske is going to get a warm recommendation from Rahm Emanuel, his fellow Gunwalker scandal conspirator.
Posted by Dutchman6 at 2:28 PM

Seems they always return to the nest. That city might be a good place to test nukes, should such ever resume...