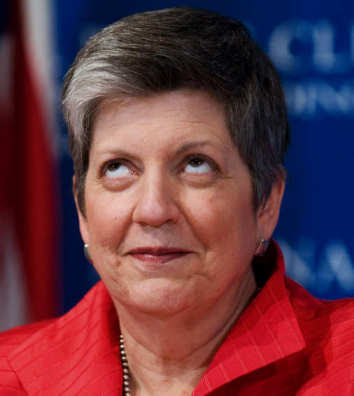 Gee, I guess they're serious. Smile now Janet, yer days in the bureaucracy are numbered.

CBS News has learned that House and Senate investigators have descended upon Arizona for their probe into the so-called "Gunwalker" scandal. They're gathering interviews from witnesses, including ATF insiders and area gun shop owners. Sources tell CBS News the congressional investigators are frustrated by what they view as across-the-board stonewalling by government agencies which have refused to provide information in the investigation. Government officials have said they won't provide information while their own investigations are ongoing.

"They're investigating themselves," says one source on Capitol Hill, "and then claiming the open investigations preclude them from giving Congress information it needs for independent oversight. It's highly improper."

ATF insiders being interviewed in Arizona are among those who told CBS News that their own agency employed a controversial strategy beginning in late 2009 called "letting guns walk," to try to gather intelligence. In that strategy, used in an operation ATF called "Fast and Furious," ATF allegedly allowed thousands of assault rifles and other weapons cross the Mexican border into the hands of drug cartels. Many of the guns later turned up at Mexican crime scenes, and ATF was notified; but documents show the agency continued to encourage local gun shop owners to sell more guns to the same suspects.

Sources and documents indicate the prosecutor who advised the "Fast and Furious" case in Phoenix was Asst. U.S. Attorney Emory Hurley. His boss, Arizona's US Attorney Dennis Burke, was a longtime chief of staff for Homeland Security Chief Janet Napolitano when she served as Arizona governor. In brief questioning from Congress in March, Napolitano said it was "premature" to comment on details of the Fast and Furious controversies. She also said she was "not aware" that an agent under Homeland Security was on the ATF Fast and Furious task force in Phoenix. Speaking of herself in the third person, Napolitano stated that "no concerns were expressed to the Secretary."

ATF's former lead agent in Mexico, Attache Darren Gil, told CBS News in an exclusive interview that he believes senior Justice Dept. official Lanny Breuer and several of his deputies who visited Mexico amid the controversy last summer knew all about the alleged gunwalking, as did ATF's Acting Director Kenneth Melson. None of those officials would speak to CBS News. Federal agencies have refused Congressional requests to turn over documents related to the official's Mexico trips.

In another development, the Assistant Special Agent in charge of ATF's Phoenix Division, George Gillett, continues to provide information to Sen. Charles Grassley (R-Iowa) who's investigating. Of the top managers possibly implicated in the gunwalking strategy, Gillett is the only one who's hired an attorney and is voluntarily providing information to Grassley's office.

According to interviews and documents, a number of ATF agents objected to what they saw as an unprecedented and dangerous approach to gathering intelligence. Objections also came from ATF supervisors and gun shop owners enlisted by the ATF to make the sales. Those who expressed concerns say they were punished, ostracized and even threatened with their jobs by managers.

An internal email from Feb. 3, 2011 indicates ATF officials may have improperly guided employees not to answer Congressional inquires in the gunwalking scandal.

When Sen. Grassley learned of the email and also of alleged retaliation attempts against whistleblowers, he fired off a letter April 8 to ATF Acting Director Melson. The letter states that it is "unlawful" for ATF to "inappropriately intimidate employees to discourage from speaking with Congress."
Posted by Dutchman6 at 2:34 PM

I see CBS has picked up the "Gunwalker" label that started with you and David.

"Admit nothing, deny everything, demand proof" (old (bad) LEO supervisors mantra).
Melson et al know that all they have to do is stonewall and/or obfuscate long enough & eventually the LSM will lose interest & this whole thing will fade into obscurity. NOT!
At least not if it gets continually gets thrown back in their face. Keep bringing it up, MAYBE enough sheeple will hear about it and actually demand answers.
Seems to me that some enterprising young crusading ADA would see this as the perfect RICO case.....

i hope someone is working to provide "immunity" for for the shop owners...

"Seems to me that some enterprising young crusading ADA would see this as the perfect RICO case....."

FedGov indicted as a "criminal enterprise"? Maybe even convicted? I like it!

Congress has the power of the pursestrings. ATF not giving answers? Then ATF not getting any money. Period. Even if the entire Federal Gubbment has to shut down for it. Let's see if the RINOs really have the Spine for the Right Stuff.