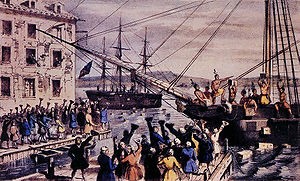 Today is also the anniversary of the opening of the Battle of the Bulge.

Every winter, I think about those poor bastards stuck in the deep freeze in the Ardennes outside of Bastogne. They originally thought the war would be over by Christmas and they'd all be headed home.

When the series Band of Brothers was released on DVD I watched the whole damn thing in a few days. I wanted to try and see what it was like at the Battle of the Bulge for myself. So on a cold winter day, with snow falling and single digit temperatures, I took my M1Garand to the range. Mind you, I was sitting under a covered firing line on a permanent shooting bench, wearing proper winter clothing. I was not lying in a foxhole in the snow. After my first clip, I started having difficulty reloading and operating the rifle. The 100 yard target was hard to see because of the falling snow and my eyes watering. After an hour out there, I was done. These guys that were there are truly super heroes.

So, how do liberals get their wish for a disarmed, subservient population? Because all this talk of gun banning – and now they are finally admitting that they want to take our guns – raises some practical questions. Not least among them is how you get a hundred million-plus armed citizens to cheerfully turn over their firearms at the behest of a bunch of liberals who have nothing but contempt for normal Americans.

Look at Connecticut’s obnoxious new gun laws banning whole categories of standard weapons. Law abiding citizens did not line up at the local police station to turn in their black rifles. They kept them. They just refused to comply. Now, Connecticut has not yet tried to send police house to house to collect these wicked tools. Mass sweeps for guns without warrants might even arouse the sensitivities of liberal judges who are willing to ignore the Second Amendment but balk at ignoring the Fourth.

But even if the government got over that hurdle, who do they send? Law enforcement is decentralized – the state can’t simply order local police departments and sheriffs to do the dirty work. Even assuming he’s not as outraged as his constituents, the local sheriff out in the country wants to be reelected, and sending his deputies farm to farm to please a bunch of big city liberals is a poor electoral strategy. A good number of chiefs and sheriffs would respond with impolite, anatomically challenging suggestions.

But assuming you find a willing agency head, you still have to get the beat cops to go get those guns. Good luck. Besides the many who would simply announce, “Hell no, I’m not doing it” (only to be fired and then initiate union agitation and budget-busting litigation), you would have a bunch who would simply not play along. They would call in sick. They would find an emergency to distract them. Or they would open a closet door, look over the three illegal AR-platform rifles, and announce “Nothing here.”

Standing on the brink of America’s second Civil War

WASHINGTON, December 5, 2015 – Americans are split into two utterly opposed camps at odds over guns, gays, climate change, abortion, the welfare state, healthcare, free speech, and national security. In the media, on the streets, and in workplaces, conservatives and progressives battle over everything.

The bitterness of this internal division has threatened civil war since 1789, unleashed it once, and may do so again.

That the United States circa 2015 is in a state of pre-civil war should terrify all Americans. As Union General William T. Sherman, responsible for the deaths of at least 3% of his countrymen noted while blazing through Georgia in 1864, “War is hell.”

Thus, because civil wars are particularly hellacious, they are especially to be avoided. Ferocious civil wars in Iraq, Syria, Afghanistan, and Yemen, and the 1990s-era wars in Yugoslavia and Rwanda, make clear what happens when a nation comes apart.

Nearly a score of civil wars ongoing around worldwide attest that is clear that prudence surrenders to passion all too frequently.

There is nothing left of the spirit of Liberty in Boston now, only leftists.