No Fire in the Glory Hole. Vanderwerf gets a lateral transfer to get him away from having to supervise anybody who, quite naturally, experiences a skin-crawling sensation every time they look at him. 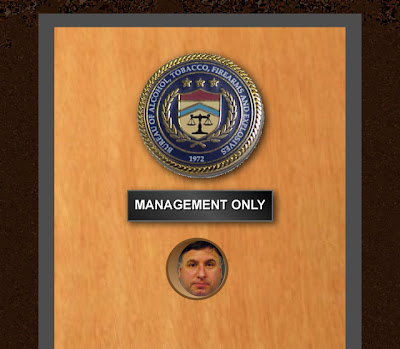 I received this email from Robert Farago this morning:

Checking this report out with my sources, I received this answer back later this afternoon:

Not promotion -- Lateral because the entire industry ops side of the house was complaining about having to report to a guy who sticks his dick in plywood. . . but he's a f--king GS 15. Gotta love America. Now he doesn't technically supervise anybody.

The source observed that while ATF continues to come down on whistleblowers like Vince Cefalu, John Dodson and others, this pervert is maintained in his position. Hmmm. That's right. . . Houston. I wonder what Glory Hole knows about gunwalking in Houston. THAT would be a reason to retain him.

I don't think HIS was the one in the hole...

That is to say that I believe he was PROVIDING services, not receiving them...

Sounds consistent. He is fully compromised so highly manageable. Plus, he sucks dick. I'd say he is ideal ATF, dare I say it, fed.gov employee.

That's one of the problems with a long term beaurocrocy - top heavy management, too many chiefs, not enough Indians. As well as the whole "can't be fired" attitude.

The Federal Government's supreme duty under the constitution is to protect the country, and that means the borders. This is the law of the land. The Federal government, having failed in this duty, is now illegitimate. The Declaration of Independence now demands that we overthrow it.

If you haven't joined a militia; if you haven't selected your local targets, you are not even in the game. You cannot claim the Declaration of Independence as your father's doctrine. You are not even an American in the traditional sense of the word.

And you are now deselected from Gideon's army.

Go home now; pull your sheets over your head, and, well, do what ever you do. I'm sure that Russell Vander Werf will approve.

To put this in perspective, a GS-15 with 5 years in grade would make $145,329 in Houston. This applies to the regular GS pay scale and if he is under the Federal LE scale it would differ. Possibly higher!

Enough to make you puke (gag).

sounds like they've got a crop of meat-whistle blowers over there, too.

Your tax dollars at work!