Praxis: The three things you have to worry about. 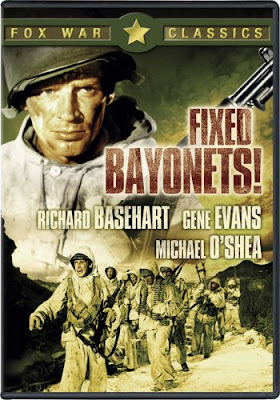 Only three things you gotta worry about in the infantry. Your rifle and your two feet. -- Sgt. Rock, Fixed Bayonets!, 1951

Fixed Bayonets! remains one of my favorite war movies. I suppose this is partly because it was done by Sam Fuller, a combat infantryman in World War II who also made classics like Steel Helmet, Merrill's Marauders, and The Big Red One. It is also partly because the principal theme of the work is the natural reluctance and doubt that someone has when they are thrust into leadership and responsibility. This theme is also explored in another movie I like, The Immortal Sergeant, starring Henry Fonda.

Fuller's movies crackle with realism and Fixed Bayonets! is no exception. Sgt. Rock's lecture about the three things you have to worry about in the infantry is one mundane truth. Throughout the movie there's a constant theme about the search for dry socks and the care of infantrymen's feet. Someone is always looking for dry socks, finding dry socks, scheming to steal dry socks from another man, or wondering what's going to happen when the owner of the dry socks discovers they have been stolen. 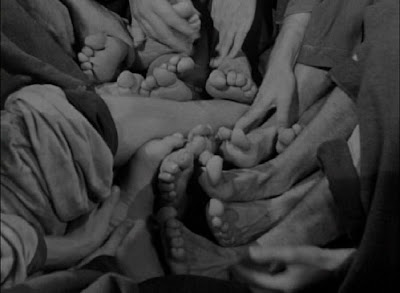 In this scene, Rock has his squad bunch together for warmth and to massage their feet. I thought of this when I ran across this on the Military Times blog posted by Rob Curtis.

I had a chance to walk the floor at the Outdoor Retailer show in Salt Lake City last week and got lots of gouge on gear coming down the pike.

Mixed in amongst the treehuggers and corporate types were a cadre of buyers from DoD SOF, Army SF, Army Rangers, the Navy Seals, AF Pararescuemen, the FBI, local search-and-rescue units and acquisition professionals from all four services. I’ll pick out a few gems and follow up with lots more in coming posts.

One of these gems was this:

Darn Tough Socks -- I found out that every Ranger in the regiment is getting a dozen pair of Vermont-made Darn Tough socks. This is in addition to the $1.5-million buy the Marines made to get good socks for every deploying Marine.

You can find Darn Tough socks on the web here.

Bob Wright, commander of the 1st BDE, New Mexico Militia, used to say that you could tell how serious a militiaman was by how many pairs of boots he owned. The same goes for socks.

Another good thing for feet, is silk sock liners. I also hit an army surplus store and found wool pants made for the Swedish Army that would keep anybody warm. It gets cold in the deserts and the mountains as well.

$10/pair; lifetime (!) warranty; can be worn for 5 days without matting and stench.

Don't ask me how I know.

Socks are life itself. When I'm working, my day can go 12-18 hours, and sometimes a hell of a lot more. No matter how dragged-out I am, I'm worth another four hours on nothing but a fresh pair of socks. When I travel, I don't don't pack them by counted pairs: I pack them by the pound.

It's not for nothin' that socks were an enormous advance in civilization.

A light sock under a heavy warm sock is best for cold or hot weather. My feet sweat always when on the move. Getting the sweat away from the skin makes for happy feet. Have not tried this sock will now

Thank you for the links. Having had to walk more than few clicks in miserable weather I can testify that hunger or thirst or even a hurting back takes second place to sore feet. Socks are second only to electricity in the progress of civilization.