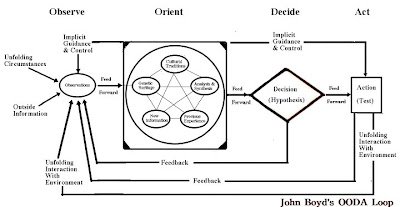 If you aren't making Global Guerrillas (here) a daily stop, you should be. John Robb is a brilliant observer of trends societal and military.

Open source insurgencies (both global guerrillas bent on disorder and resilient communities focused on stability), the general description for movements where many small groups with different motivations cooperate to move the war forward, have a big advantage over traditional hierarchies (both conventional militaries and guerilla movements formed in the 20th Century). They adapt well to highly ambiguous, complex, and rapidly changing environments.

One way to look at this is through the lens of John Boyd's OODA loop. It is arguably the best description of personal and organizational decision making that has been constructed to date. Unfortunately, the model breaks down in the modern environment's hyper-complexity, torrential feedback loops, and rampant network connectivity. The reasons are clear:

** It is a serial process. The only way to speed up decision making is to make the loop go faster. This serial process quickly reaches the hard limits of human communication and collaboration. Also, the slowest part determines the speed for the entire system.

** It isn't flexible or creative enough. The orientation process of any single organization is insufficient to accurately model the existing environment. In short, a dog's brain that runs 1,000x faster is still a dog's brain.*

** It's hermetically isolated. Decision making improvements in modern organizations don't naturally propagate horizontally (by design). The process used is opaque as possible and the results are often intentionally obscured to enable that organization to gain advantage.**

Open source insurgencies solve these problems by (I'll draw a revised OODA process for this when I find the time):

** Decision making processes run in parallel. The larger the number of loops, the faster it goes.

** Multiple responses by a diverse group of participants (anybody can participate) generates a wide variety of hypothesis and decisions. Many of which, work.

** Sharing and rampant copying of the processes (i.e. the hypothesis and orientations) that work yields strong horizontal propagation. It scales, potentially even to a global level. 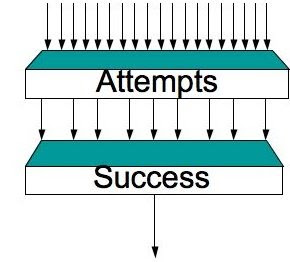 * It's even worse than described. Most modern hierarchical organizations and their supporting professions actively avoid the employment of the most important types of minds necessary for decision making in complex environments: pattern matchers and system thinkers that can routinely develop new synthetic models of complex processes. In Boyd's lingo: the sign outside almost all modern organizations, both corporations and government, is "no snowmobile's allowed." Here's an example: the US government's and the economic profession's abysmal decision making effort in response to the emerging global financial and economic meltdown.


** This damages the speed of response and the scalability of response. Why? A lack of horizontal propagation prevents system wide synchronization of new modes of operation as well as the development of ecosystems.

The system described sounds very like 'federalism' whose decision-making model has been called "massively-parallel trial-and-error". I like it.