Obama's "Egg of Power" and other Talismans

Talisman (tăl'ĭs-mun)
1. An object marked with magic signs and believed to confer on its bearer supernatural powers or protection.
2. Something that apparently has magic power. 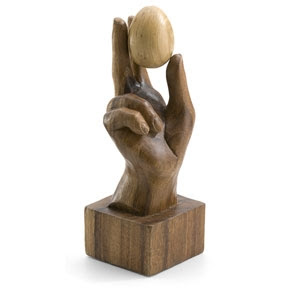 OK, if you haven't heard, this is Barack Obama's "Egg of Power" wooden sculpture that he brought back from a trip to his ancestral home in Kenya in 2006. It now resides in the Oval Office according to these guys who are selling copies for $100.00 a pop. They say:

The wooden sculpture . . . combines African tribal tradition with a poignant message. . . (T)he "Egg of Power" symbolizes the fragility of chiefly power: According to an ancient proverb, power is like an egg; if it's held too tightly, it breaks, and if it's held too loosely, it will slip from grasp. Art has always been an integral part of African life, and wood carvings are expressions of power and ritual in the life of the tribe.

Wood is the most popular material used in native sculpture, since it can be found in abundance. Skilled carvers use simple hand tools to create these stunning works of art -- gouges, chisels, mallets, and pointed instruments. Although no two pieces are ever identical, as carvers meticulously hewn each piece according to the grain and texture of the tree, each is rich in symbolism, conveying a guiding principle of leadership, one that has been embraced by the President.

Offered is an authentic artisan work of art, true to the exquisite wooden sculpture, hand-carved from native woods, on the President's desk. The "hand" is carved from the hardwood of the Monkey Pod tree, with interlocked, wavy grain and colors that range from medium tan to dark brown; the "egg" is lathe-turned from the hardwood of the Coffea Arabica tree, a species that produces the majority of coffee consumed in the world. This remarkable work of art stands 10-inches high and weighs 1 1/2-pounds.

For those of you who may be a little skeptical of the message of the "Egg of Power" how about the She-Who Spiral Goddess Wand, which Hillary would have had on her desk in the Oval Office if she hadn't been whupped by the Lightworker.. 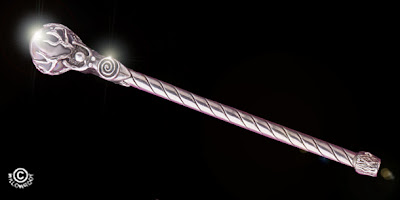 According to its maker,

The Spiral Goddess stands before a tree, its powerful branches embracing a crystal clear gazing sphere. The tree brings grounding energy to this dynamic Wand that is full of fire and air energy. The tree also represents the element of water as it draws water from the Earth and transforms it into air in the fiery presence of sun light. The bottom of this Wand is ornamented with a waxing Crescent Moon, representing the sacred process of becoming.

The "She Who" Wand is 10 inches long and is made of fine quality lead-free Pewter. The price of this Spiral Goddess Wand is $89.

Another talisman I always enjoy seeing upon my return to the state after a long journey north is this: 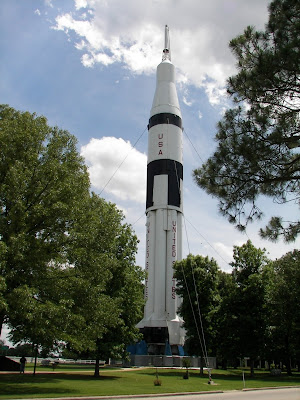 This Saturn IB rocket stands at the Alabama Welcome Center on I-65 at Elkmont, Alabama. While it cannot fit in the Oval Office, it does have a powerful message, which was once explained to me by an Elkmont good old boy. When I asked him, "Why the rocket?" He said, "It's to show them Yankees we can make missiles in Huntsville and if we ever get nukes, they'd better watch out."

We'll as talismans go, I guess there are worse ones. But my favorite talisman is this:

This is the Rifle of Power. For plain bad juju, it has the Egg, the Wand and the Missile beat all to heck. This is my talisman. There are many like it, but this one is mine. ;-)
Posted by Dutchman6 at 9:05 PM

"There are many like it but this one is MINE." Pretty much defines a "Citizen" I have been lurking for quite a while, and have learned much from your blog and David's as well. I thank you both. Time is short but I have been making prepreations for the storm I see on the horizion. Your guidience and foresight have been of great value to me. I hope some day to repay the obligation.
Harvey Beaver
Boise, ID.

My friend, when it comes to freedom, I'd have to say that talisman number 3 (the M1A) is most impressive to me.

Of all three, it grants the most freedom to he who wields it wisely, and is by far the most effective bane upon those who would impose their capricious will upon others.

I've got one of those. I've got many others. I'm getting many more.

Today I Put my first M1A on layaway at the Local.

I chose the Socom 16